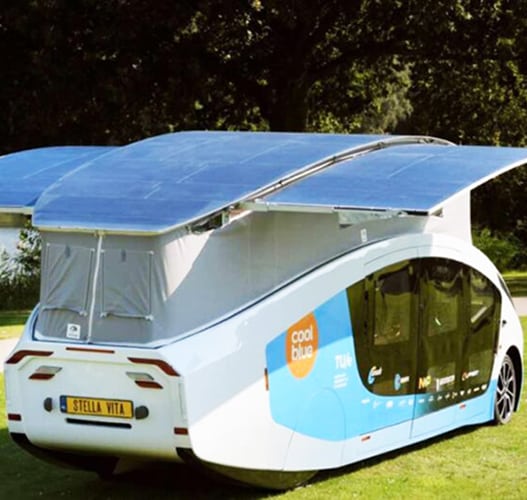 22 Dutch university students have completed a 1,800 mile road trip powered only by the sun, on a quest to show that sustainable vehicles can let you travel the world without harming the environment.

Enrolled in Eindhoven University of Technology in the Netherlands, the students say their van—named Stella Vita—is the world’s first solar powered mobile home.

With its solar panel roof, and wings that fold out with additional panels when parked, the team has doubled the solar surface to 17.5 square meters, which generates enough energy to live and drive on.

Made for two people, it has a kitchen with a fridge, a seating area, bed, shower and toilet. With a roof that pops up when stationary, you can stand inside while cooking.

“Stella Vita is a self-sustaining house on wheels,” says their website. “Through solar panels on the roof, it is independent of charging stations.” But it does have an electric power charger in case of emergency.

In one year, the students succeeded in designing and building the mobile home and last month completed their demonstration road trip from Eindhoven to the southern tip of Spain.

The drivers and passengers can also track the amount of energy used, and how much is remaining. News reports say that it has a 60 kilowatt-hour battery that allows it to travel 373 miles at night.

“On a cloudy day the vehicle can still produce 60-70% of the energy,” the team coordinator Dr. Carlo van der Weijer says. “And even if there is no sun at all, you still have an efficient, normal electric car that you can charge from a charging port.”

This isn’t the first solar vehicle made by the team of University students and faculty that work under the name Solar Team Eindhoven, launched in 2012. In their first year, they pioneered the building of a solar powered family car called Stella, and since then there have been 3 more vehicles before this pop-up van.

Stella and its successors Stella Lux, Stella Vie and the 5-seater Stella Era all raced in the World Solar Challenge in Australia and won in its Cruiser Class all four times it was held – in 2013, 2015, 2017 and in 2019. Being the only competing “family car” with a license plate, the road registration of Stella cars contributed to their winning score in the races.

Solar Team Eindhoven has set up a non-profit foundation to promote their practical solar vehicle concepts for adoption on a broader scale.

In 2017, some of the students responsible for the vehicles also  launched their own start-up company to make a commercially viable version of the car called Lightyear One, which is due to deliver the 4-passenger solar cars costing around $127,000 this year.