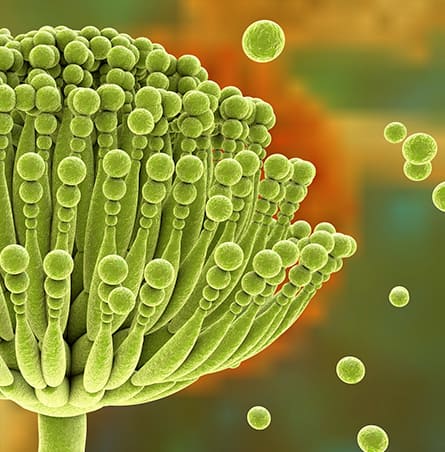 I call Aspergillus the ‘cactus of moulds’ because it has the ability to begin growing and surviving with very little water. It doesn’t need a catastrophic water event that saturates the floors or walls of a home. A spore from this species can begin to colonise simply if you have high indoor humidity.

In comparison, black mould requires much more available water for a spore to begin to colonise an area.

Aspergillus has the ability to produce microscopic toxins called mycotoxins. When the colonised mould feels threatened, it will begin producing these tiny toxins along with more mould spores. One example of a threatening situation is when another species of mould moves in and starts encroaching on the Aspergillus’ territory.

Not only do mycotoxins decrease the indoor air quality in the home, but these particles can affect health in a number of ways.

Everyone responds differently to mould exposure. Genetics, length of time exposed, the volume of exposure, and pre-existing conditions all play a role. While one person may not feel any symptoms, another may have severe reactions.

How Can You Spot It?

One of the issues with Aspergillus is its ability to go undetected in a home. This is largely due to its lighter colour. There are over 180 species of Aspergillus identified so far, and they come in a variety of colours, but many are greenish-yellow hues.

Unlike black or brown mould that looks like coffee-like stains and draws the eye, this muted colour often blends in with its surroundings. This means that Aspergillus can continue to grow for much longer before being detected.

Where Does It Tend To Grow?

Like all species of mould, Aspergillus requires some moisture, which means it thrives in any humid, wet areas inside a home with lots of condensation potential. (Think attics, windows, windowsills, and basements.) Water events like leaks and flooding can also lead to Aspergillus growth indoors.

Make sure to look carefully throughout these spaces since Aspergillus is often so light in colour (although, it can be brown or grey too!).

Using a torch is a great way to shine a light on any hard-to-see mould growth.

During this mould hunt, make sure to rely on your nose as well. Mould growth often creates a musty, earthy, rotten, and damp scent.

What To Do If You Find It

If you smell mould, find visible mould growth, or see water stains, coffee-like discoloration, or dirty-looking surfaces that could point to mould, I would recommend calling a Building Biologist as soon as possible. It’s always best to err on the side of caution when it comes to mould growth.

The Building Biologist should be able to give you a picture of what the mould situation is, including what species of mould are present, if there are any other mouldy issues elsewhere in the home, and if any other contaminants exist as well.

Armed with this information, you can properly remove the mould, fix the source of the problem, and handle all contaminants present.