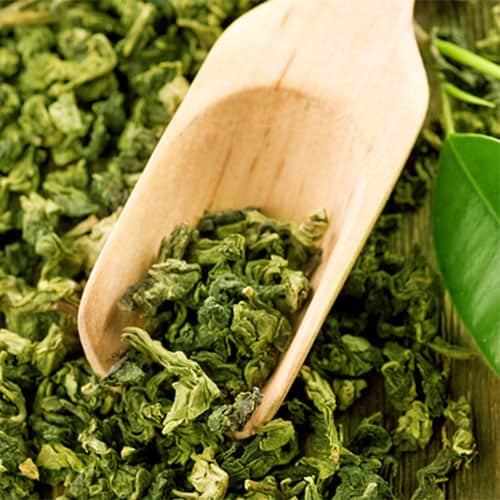 Have we found and isolated the secret ingredient that gives tea its powerfully calming-yet-focused effect? L- theanine might be the closest thing we’ve got so far. The traditional therapeutic use of green tea dates back to China 4,700 years ago, and the Japanese regard tea so highly they’ve created a ceremony for it and a separate teahouse in which to serve it.

Thich Nhat Hanh, the Zen master and global spiritual leader, describes tea drinking as a spiritual, meditative act: “Tea is an act complete in its simplicity … This is the act of life, in one pure moment, and in this act, the truth of the world suddenly becomes revealed: all the complexity, pain, drama of life is a pretence, invented in our minds …”

Today, drinking tea still symbolises psychological calm and contentment for most, and now science is starting to explain the physiological reasons and mechanisms behind these effects. Several scientific publications, including clinical and epidemiological studies, have backed up the health benefits of both black and green teas, with particular focus on L-theanine – a calming amino acid bioactive found to promote alpha-wave brain production (an index of wakeful relaxation similar to that experienced during and directly after meditation).

More than just “umami,” it turns out. L- theanine is a neurologically active organic compound present in the green tea plant (Camellia sinensis, and certain other species of Camellia), the bay bolete mushroom (Boletus badius), and certain nootropics (i.e. dietary supplements that promote cognitive function). In green tea, L-theanine is the main component responsible for the exotic savoury taste of ‘umami.’

Within around 30 minutes of consumption, L-theanine crosses the blood-brain barrier, where it appears to impact brain waves in diverse and useful ways. Here are six ways that L-theanine promotes cognitive function and supports overall brain health.

This powerful phytochemical has a profound impact on oscillatory brain activity (aka brain waves). L-theanine is shown to influence alpha waves, the same brain bandwidth that promotes relaxation without drowsiness or sedation.

Alpha brain-wave production also happens during deep meditation, when sensory inputs are minimised and the mind is generally clear of unwanted thoughts or distractions. Interestingly, stimulating alpha waves has also been shown to boost creativity and lift mood.

L-theanine not only helps you enter an ideal mental state of relaxation, it helps you further focus on the task at hand by promoting attention and working memory. In a 2011 study published by the Journal of Functional Foods, healthy college students saw enhanced performance in a visual attention task and their reaction time after taking L-theanine supplements.

Because of its antagonistic effects on glutamate receptors and how it affects overall cognition, L-theanine seems to have neuroprotective and cognitive-enhancing abilities. In a 2011 Pharmacological Research study, green tea powder enriched with L-theanine (i.e. 47.5 milligrams theanine per day) helped enhance cognitive function and promote overall brain longevity in older individuals.

By supporting production of the inhibitory relaxing neurotransmitter GABA, L-theanine plays a key role in mood support. GABA is important for nervous system function, and is often used as a targeted supplement to calm anxiousness, promote restful sleep, and bolster overall mood. L-theanine has also been shown to have a similar boosting effect on dopamine and serotonin levels in the brain in pre-clinical neurochemistry studies.

There are several studies demonstrating how L-theanine supplementation supports resilience to stressors and balances out activation of the sympathetic nervous system. In other words, L-theanine not only helps reduce feelings of anxiousness and promotes stress management in the first place, but it also attenuates the effects of a high-stress response while you’re in the midst of it!

Whilst L-theanine is all about zen focus and mental acuity at lower doses (around 100 milligrams), at higher doses of 200 milligrams and up, L-theanine has been shown to help sleep in a number of ways, including promoting relaxation pre-bedtime and delivering that ‘refreshed’ feeling that comes after a good night’s sleep, according to a 2015 Journal of the American College of Nutrition review.

Additionally, thanks to L-theanine’s impact on GABA synthesis, the ‘calm down’ signal likely plays a part in these sleep health benefits.

How To Take L-theanine

The L-theanine content of tea varies considerably, with estimates around 1 to 2% of the dry weight of leaves and a single cup of tea containing around 25 to 60 milligrams of L-theanine.

Data indicates that L-theanine at ‘realistic dietary levels’ as low as 50 milligrams has significant mental effects (on alertness and cognitive arousal).

L-theanine is a premium and effective ingredient found in some high-quality nootropic supplements as well, which help promote cognitive function and brain activity in a convenient, targeted delivery format.

A 2012 study published in The Journal of Nutrition found that L-theanine uptake and metabolism in healthy participants is effective and comparable when provided via capsules or green tea, so you can leverage the power of this amino acid bioactive in multiple ways. Some ideas to get L-theanine on the regular:

L-theanine is an amino acid. It is generally safe and well-tolerated by healthy adults, for whom typical doses range between 50 and 400 milligrams.

As always, consult your doctor or integrative or functional medicine practitioner before you begin taking a supplement or make any changes to your existing supplement routine (especially those with blood pressure considerations, as L-theanine can reduce blood pressure). Together, you can go over any possible interactions and find the form and dose that’s best for you, depending on your unique health profile.

When considering a supplement, try to find out as much as you can about the ingredient science, quality, and sourcing as well as bioavailability.

Possible Side Effects Of L-theanine

L-theanine appears to be remarkably safe with no observed negative effects recorded in human studies so far (and its history of use in tea goes back thousands of years, further bolstering this phytonutrient’s welfare).

To inform current clinical research, early preclinical dose-response studies in animals were useful to establish safety limits for intake. In animal research (rodents), L-theanine has been demonstrated to be safe even at very high doses (4,000 milligrams per kilogram of body weight per day was the highest dose tested).

Nonetheless, it’s always a good idea to talk to your health care provider first because everyone’s response to foods and supplements are different and depend on individualised factors.