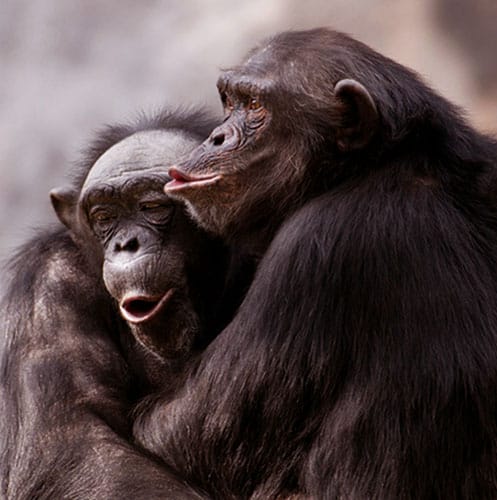 We humans like to think our mastery of language sets us apart from the communication abilities of other animals, but an eye-opening new analysis of chimpanzees might force a rethink on just how unique our powers of speech really are.

In a new study, researchers analysed almost 5,000 recordings of wild adult chimpanzee calls in Taï National Park in Côte d’Ivoire (aka Ivory Coast).When they examined the structure of the calls captured on the recordings, they were surprised to find 390 unique vocal sequences – much like different kinds of sentences, assembled from combinations of different call types.

Compared to the virtually endless possibilities of human sentence construction, 390 distinct sequences might not sound overly verbose. Yet, until now, nobody really knew that non-human primates had so many different things to say to each other – because we’ve never quantified their communication capabilities to such a thorough extent.

“Our findings highlight a vocal communication system in chimpanzees that is much more complex and structured than previously thought,” says animal researcher Tatiana Bortolato from the Max Planck Institute for Evolutionary Anthropology in Germany.

In the study, the researchers wanted to measure how chimpanzees combine single-use calls into sequences, order those calls within the sequences, and recombine independent sequences into even longer sequences.

While call combinations of chimpanzees have been studied before, until now the sequences that make up their whole vocal repertoire had never been subjected to a broad quantitative analysis.

In analysing the vocalisations, the researchers identified how vocal calls could be uttered singularly, combined in two-unit sequences (bigrams), or three-unit sequences (trigrams). They also mapped networks of how these utterances were combined, as well as examining how different kinds of frequent vocalisations were ordered and recombined (for example, bigrams within trigrams).

In total, 12 different call types were identified (including grunts, pants, hoos, barks, screams, and whimpers, among others), which appeared to mean different things, depending on how they were used, but also upon the context in which the communication took place.

Even so, the data so far suggest chimpanzee communication is much more complex than we realised, which has implications for the sophistication of meanings generated in their utterances (as well as giving new clues into the origins of human language).

“The chimpanzee vocal system, consisting of 12 call types used flexibly as single units, or within bigrams, trigrams or longer sequences, offers the potential to encode hundreds of different meanings,” the researchers write.

“Whilst this possibility is substantially less than the infinite number of different meanings that can be generated by human language, it nonetheless offers a structure that goes beyond that traditionally considered likely in primate systems.”

The next step, the team says, will be to record even larger datasets of chimpanzee calls, to try to assess just how the diversity and ordering of uttered sequences relates to versatile meaning generation, which wasn’t considered in this study.

There’s lots more to be said, in other words – by both chimpanzees and scientists alike.

“This is the first study in a larger project,” explains senior author Catherine Crockford, a director of research at the Institute for Cognitive Science at CNRS, in France. “By studying the rich complexity of the vocal sequences of wild chimpanzees, a socially complex species like humans, we expect to bring fresh insight into understanding where we come from and how our unique language evolved.”

The findings have been reported in Communications Biology.