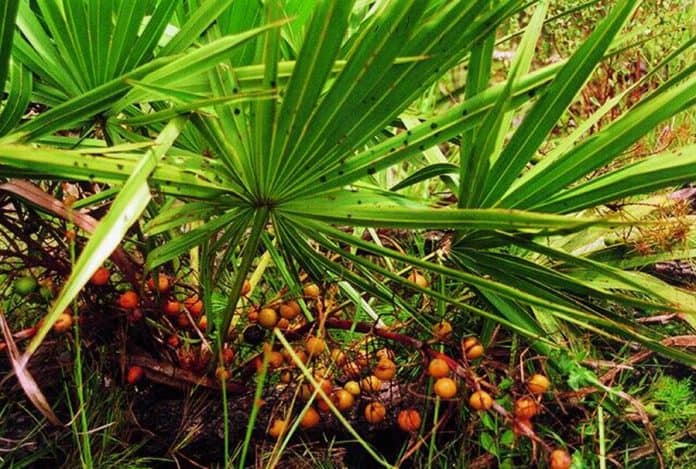 There’s a plethora of research on the effectiveness of certain plant-based supplements, and saw palmetto is one of them. Fanlike fronds identify this palm tree (Serenoa repens) that grows from sandy coastal areas to pine forests in the Southeastern U.S. Extracts of saw palmetto have been used by Native Americans as a traditional medicine for centuries.

As a supplement, saw palmetto has myriad uses, but some are controversial due to the (alleged) absence of scientific evidence. One of them is how it may be able to impact testosterone; another is its effect, for men, on reproductive health, including the prostate, a small gland located just below the bladder that’s part of the male reproductive system; most studies on saw palmetto come from studies on men.

Saw palmetto inhibits an enzyme called 5-alpha reductase, which converts testosterone to a powerful androgen hormone known as dihydrotestosterone, or DHT. As such, it may reduce the effects of DHT as men age. A hormone that regulates the development of primary sex organs, particularly for male development in puberty, DHT production takes place in both ovaries and testes, as well as the adrenal glands.

However, some scientists don’t recognise studies on saw palmetto in regard to its ability to regulate testosterone levels, refuting a review of studies published in the Journal of the International Society of Sports Nutrition, during which men taking the supplement for two weeks had higher testosterone levels than those given a placebo. Naysayers say the evidence comes from outdated studies.

There does seem to be an association between saw palmetto in regard to its influence on testosterone, as there are many more studies indicating there’s much more to this plant than previously known. One benefit that’s been getting much more attention lately has to do with hair loss. (Anagen, incidentally, refers to the state of active hair growth, versus telogen, which is the “resting” phase during which your hair falls out.)

Although it’s common in both men and women, androgenetic alopecia (aka hair loss) can cause balding more so in men than women, because men have more testosterone than women. Usually androgenetic alopecia begins with a receding hairline in men, eventually forming the classic male pattern baldness “M” shape. Women’s hair, on the other hand, generally presents as an all-over thinning on the scalp; it’s rare for women to lose their hair completely.

While it’s normal for healthy people to lose hair and have it grow back, one interesting study shows that high DHT levels can prevent regrowth, due to the way DHT binds to the androgen receptors and increases their expression, encouraging the “miniaturisation” of the hair follicles and preventing new growth from occurring.

A different type of hair loss, alopecia areata, produces balding in circular patches. Alopecia areata affects around 6.8 million people in the U.S., and refers to a common autoimmune disorder that often results in unpredictable hair loss, with no known cure. It affects both sexes, usually before age 30.

A more serious form is known as alopecia totalis, where all the hair on the head goes. Alopecia universalis is the most serious case, when the hair loss involves the entire body. Medical News Today also reported the results of an animal study in China that investigated the effects of saw palmetto:

“The research on saw palmetto and hair growth is varied and somewhat limited, but there are studies indicating that the plant extract might show some promise as a treatment. One study in mouse models found that saw palmetto promotes hair regeneration and repairs hair loss by activating the signalling pathways responsible for hair growth.”

More specifically, the study demonstrated that transforming growth factor ß2 (or TGF-ß2) signalling and mitochondrial signalling pathways was how hair growth was regenerated. According to the study, saw palmetto significantly increased human keratinocyte cells incubated with DHT, which resulted in increased hair density, weight and thickness.

It significantly triggered follicle growth and decreased inflammatory response even better than finasteride (Propecia), a drug used to treat an enlarged prostate and/or scalp hair loss in men. A clinical trial in 20161 noted that when saw palmetto was applied topically, men with male androgenetic alopecia (AGA) had increased hair count at weeks 12 and 24 compared to baseline. However, study authors added that “concentrated S. repens [saw palmetto] product beyond four weeks may be necessary for sustained efficacy.”

A study conducted in 2014 also yielded positive results. Twenty-five male participants experienced an 11.9 percent increase of their hair count after using saw palmetto along with a treatment of 10 percent trichogen veg complex (an herbal agent said to stimulate the scalp and subsequent hair growth, according to one site) topically for four months.

According to another study conducted in 2002, AGA is the “structural miniaturisation of androgen-sensitive hair follicles in susceptible individuals, and is anatomically defined within a given pattern of the scalp.”

Again, biochemically, one of the contributing factors of AGA is the conversion of testosterone to DHT via the enzyme 5-alpha reductase. This conversion or metabolism is also key to the onset and progression of benign prostatic hyperplasia (BPH), aka prostate gland enlargement, which can block urine flow from the bladder and cause other symptoms.

Randomised, controlled and double-blind studies in 2011 and 2012 show that when given increased dosages of saw palmetto for BPH, its effectiveness was quite lacklustre. However, another study in 20141 combining it with lycopene, selenium and tamsulosin proved more effective.

Getting back to the 2002 study that looked at saw palmetto for AGA, 10 men between the ages of 23 and 64 years of age and in good health, with “mild to moderate” AGA, joined the study, which involved testing saw palmetto extracts and beta-Sitosterol (another plant-based extract linked to relieving BPH symptoms) to treat it.

The authors noted “highly positive” responses to treatment, as after the final visit, six out of the 10 participants were rated as improved, a conclusion the authors said established the treatment and justified larger trials. However, in addition, researchers found another benefit for saw palmetto in relation to its ability to slow testosterone conversion: the prevention of prostate cancer, which strikes 1 in 9 men in the U.S. alone.

“Research has suggested that DHT may contribute to the development of prostate cancer. Therefore, it is possible that saw palmetto might help to prevent this disease by slowing down the conversion of DHT. Prescription medications can also slow down this conversion, but they often have severe side effects. Saw palmetto may inhibit DHT without serious side effects.”

What You Didn’t Know Might Help You: Saw Palmetto Can ‘Up’ Your Sex Drive

It’s a fact: Saw palmetto really can improve the libido of men with low testosterone. In one study, improvement for men was five-fold, the journal Urologia Internationalis asserted after 120 men with prostate problems reported better working order in the areas of:

The study involved men suffering from lower urinary tract symptoms (LUTS) brought on by BPH, which the study authors say affects around 60 percent of males by the time they reach 60 years of age. The comprehensive study revealed “statistically significant improvements” in the men who took saw palmetto over a two-year period. All five of the above improvements were noted during the study period, during which time the participants were treated with 320 milligrams (mg) of saw palmetto extract.

In terms of erectile dysfunction, the men who filled out the 15-question International Index of Erectile Function (IIEF) Questionnaire at the end of the study related “improved sexual function” as well.

But what does saw palmetto do for women?

While low testosterone can also lower women’s sex drive, there’s evidence that supplements or extracts of the palm plant may have some very valuable benefits. According to Medical News Today, saw palmetto may help regulate certain female hormones – it may have an oestrogen-like effect and balance out the effects of excess testosterone in women, which is often seen in a conditions known as polycystic ovary syndrome (PCOS):

“Women with PCOS have elevated levels of male hormones. This causes a specific set of symptoms, including irregular and heavy menstrual periods, excess body and facial hair, and acne.”

In fact, women who have PCOS may find that it can also make the arrival of menstrual periods hard to predict or even bring them to a stop. It may also alter women’s ability to have a child. (It should be noted that one thing saw palmetto does not do is improve fertility, something that’s been claimed in some cultures for many years.) WebMD lists symptoms of PCOS, which often takes years to diagnose:

Some scientists say a substantive link between saw palmetto and PCOS in women is hard to pin down because most of the studies have been on animals. However, one study shows that saw palmetto can block prolactin receptors on ovarian cells that are overexpressing them and reduce high levels of androgens and prolactin in women with PCOS.

Adverse Reactions and Possible Side Effects

In the clinical trial on the 120 men with enlarged prostates, scientists concluded there were no adverse effects from taking saw palmetto. That’s not to say there are none, however, even though it’s plant-based, possible side effects include: stomach pain, headache, nausea, vomiting, diarrhoea, constipation, bad breath and heartburn.

Additionally, experts warn it may cause reactions in people taking certain medications, including oral contraceptives, aspirin, anticoagulants, blood thinners or prescriptions such as warfarin, and iron supplements. Saw palmetto generally comes in four basic forms: tablets, powdered capsules, liquid extracts and whole dried berries. People have tried making tea from the berries, but since the compounds aren’t water soluble, it’s not a good way to “get the goods.”

Tablets and capsules are the easiest to find and the easiest to ingest, and it’s interesting to note that they’re also what some researchers have used in their studies. In regard to how much to take, you should consult your doctor (or integrative doctor) first about safe dosages, but for prostate problems or PCOS, a journal article on the topic recommends 160 mg twice a day.

*This is an edited article. For the full article please visit the below website, and we would suggest you also conduct your own research for further information where appropriate.