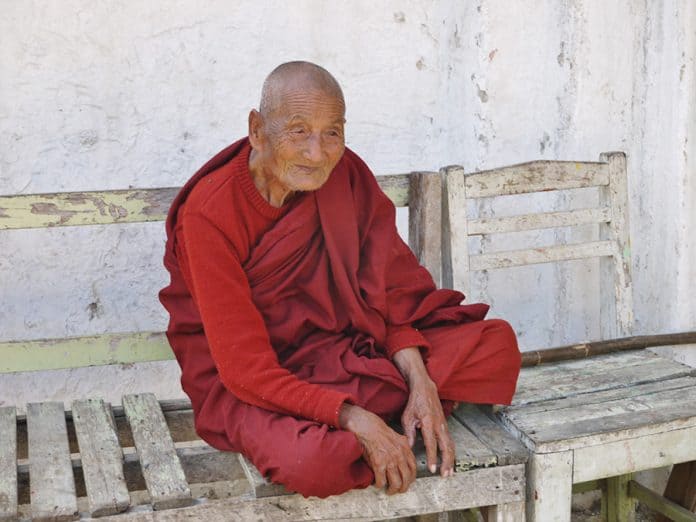 For most of my adult life, I have been in close association with monks and nuns, and I have watched many of them grow old and pass away. Surprisingly, I have never seen a practising monastic develop Alzheimer’s or dementia. This is a phenomenon I have given a lot of thought to, and I think the medical community is not paying enough attention to it. Why do elderly monks and nuns remain so sharp right up until the moment of passing? I think for the answer to this question we have to look at their daily schedules.

Monasteries are run by the clock. There are fixed times to rise and go to sleep, eat, meditate, perform rituals, study, and even a fixed period for free time. I lived in a monastery for 10 years and stayed in their proximity in Nepal and India for many more, often attending their rituals on a daily basis.

During the 10 years I lived in Nepal as a married layman, I attended afternoon rituals on a daily basis at a local temple, and in the morning visited the stupa near my home to offer butter lamps and circumambulate it (walk around it in a clockwise circle, which is supposed to accumulate blessings) and so forth. Joining in the monastery’s activities daily afforded me the opportunity to develop close friendships, and I have maintained these friendships for decades since.

And one of the most remarkable differences I have noticed amongst my ageing lay friends compared to ageing monks is that while both age physically in pretty much the same way, they don’t mentally. The monks maintain a youthful attitude as they age, while my lay friends’ attitudes have withered as their bodies declined. The lay friends become less playful, cheerful, and enthusiastic. But the monks often retain these qualities until the very end. In other words, the monks have maintained a spark of life that my lay friends have lost.

In addition to the attitude of monastics remaining equanimous throughout their lives, I have noticed that their thinking faculties remain sharp. My lay friends seem for the most part to age in attitude as well as thinking in a manner commensurate with their physical body.

Often as we age—I am now 71—we do things differently than we did when we were younger. Naturally, there are physical activities that ageing precludes our performing. We may not be able to crack open a rusted bolt to change a flat tyre that we could when in the prime of our health, but this goes for everyone, monks as well.

But the monk maintains a youthful, light-hearted, humorous, and playful attitude, sometimes even a childishness that most of us tend to lose as we grow older.

For example, in Nepal, I had a wonderful friend who was about 80 when we met, and I was about half his age. His name was Dundo. Dundo was a Tibetan monk living in His Holiness Karmapa’s monastery near the Swoyambu stupa. I visited Dundo almost every morning for years, often bringing my two small children, and had tea in his room. Naturally, Dundo being 80-plus years old and the eldest monk in the monastery, we all took special care of him. But Dundo outlived many of his caring fellow monks and passed away when he was over 100 years old.

I moved to the United States when Dundo was about 90, but he was my first stop whenever I visited Nepal on almost a yearly basis. I didn’t see any cognitive changes or attitude changes even as he passed the 100-year mark. Moreover, although Dundo’s age was rare, his mental well-being was not unusual at all amongst his fellow ageing monks. I have thought quite a bit about the active and sharp cognitive faculties that monastics maintain as they age even as their body becomes worn and don’t serve them so well anymore. I have made some observations that might contain a useful key for all of us to stay young in spirit and mind as we age.

The meditation and rituals monks do are continued up until they die. I believe that their rhythmic way of life keeps them in harmony with themselves. In our society, we generally reach a point when we retire, but not so with monastics. When we retire, we often retire our minds as well. Our attention is not as engaged as when we worked, and physically we are not as active.

The monastic’s life doesn’t change in this way. And since an elderly monastic does pretty much the same activities as when he was youthful, could it not be that the demands and responsibilities of a routine keep him free of Western diseases like Alzheimer’s and dementia? I think so.

When we retire, our whole life usually changes, and this cannot help but have a profound effect on our attitude and, as the years roll on, our cognitive abilities as well. We don’t see the people from work anymore, the drive to work is no longer part of our lives, we don’t share the lunch hour with our colleagues, and so forth. We are less engaged on every level, and less is demanded of us. We may no longer feel essential or part of a team.

While some of us who retire replace the responsibilities that work requires with activities that engage us, many will not. Some of us will allow ourselves to be entertained by media and become more passively involved with life. If we are bored, we may shop, or snack, or take a stroll, or play golf or fishing, and so forth, but we often don’t do these things in a disciplined, routine way. Doing everything at our leisure may be the source of many of our problems later in life.

The monk maintains the same friendships, schedule, eating place and diet, rituals, and meditation with little change throughout his life.

If he moves to another monastery, it will remain similar. He has no leisure time. Prayers and personal study also change little. The body growing older is no reason to allow a nun to alter her meditation, ritual practice, study, meditation, or prayer. The nun has no abrupt changes externally like we do as lay people when we retire. I think it is the absence of age-inspired leisure time that keeps the monks and nuns minds youthful into old age.

The importance of keeping rituals we have grown accustomed to as long as possible is something we can all learn from monastics. By rituals, I mean our rituals as a layperson. Everyone has some ritual-like activities that they have come to identify with: a daily walk, run or swim, reading, a hobby. We identify with these much like a monk does with his. When we give-up our lay rituals, because we feel we are growing out of them or retire, we are paving the way to an attitude change and cognitive loss as well.

There may not be much we can do about physically ageing, but there is much we can do to prevent mental decline associated with ageing. As we age, we should maintain schedules because mentally we identify with them and they give us a sense of purpose and responsibility. A sense of duty is fostered when we have a routine and a schedule to keep up, and this keeps our mind sharp, healthy, and engaged. We don’t have to be “spiritual” to be inspired by monks and nuns and apply their principles within the context of our own lives. The time to begin this is not related to age, and the best time will always be now.

More study is necessary to see if my personal observations could be backed up with supporting statistics. The lives of monastics as they age would be, I believe, an important field of medical research. Until that time comes, we can all better our lives by adopting some of the benefits of routine and engagement that monastics employ. We certainly don’t have to be in a monastery to do that.