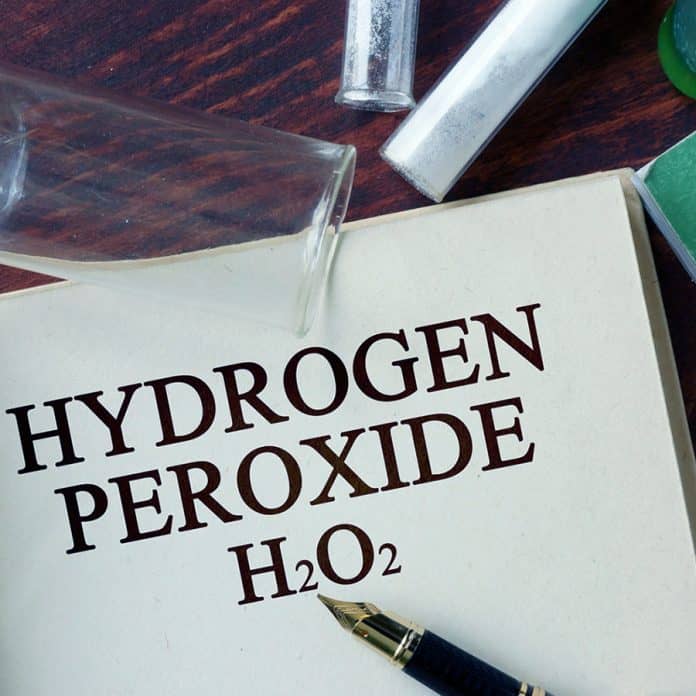 Can an inexpensive and easy to administer at-home treatment treat the novel coronavirus, SARS-CoV-2? According to Dr. Thomas Levy, the answer is yes. The remedy in question is hydrogen peroxide, aerosolised in any standard nebuliser. Originally conceptualised in the early ’90s by Dr. Charles Farr, hydrogen peroxide treatment can successfully treat most viral respiratory illnesses, including coronavirus.

According to Levy: “While different individuals can be expected to have variable degrees of positive response, this intervention can be anticipated to eliminate eventual fatal disease outcomes in all but the most advanced cases.”

It’s worth keeping in mind that while the elderly and those with underlying medical conditions are at increased risk of serious complications and death, the overall mortality rate of COVID-19 appears to be quite low, and very similar to influenza.

A compilation of reported mortality statistics from around the world can be found in the paper, Likelihood of Survival of Coronavirus Disease 2019,” published in The Lancet Infectious Diseases, March 30, 2020. For the latest up-to-the-minute COVID-19 stats, see the “Coronavirus COVID-19 Global Cases by the Center for Systems Science and Engineering” page.

That said, considering the fact that scientists still do not know whether COVID-19 patients gain lifelong immunity to the virus, or whether it will act more like cold and flu viruses where each season presents a new opportunity for infection, having an inexpensive and simple way to treat yourself at first signs of symptoms may be a priority for many.

To perform this treatment you need two items:

However, it is better to purchase the more expensive food grade hydrogen peroxide as it doesn’t have any stabilisers in it. Stabilisers are proprietary and companies don’t need to disclose them on the label, but some can be problematic. Typically food grade peroxide comes in concentrations higher than 3% so you will need to dilute it down to 3% (please refer to the video by Dr Mercola on his website shown at the bottom of this article).

Viruses are not “alive” per se. They need a live host in which they can infect live cells that then replicate the viral DNA and RNA. Once a cell is infected, newly replicated viruses exit the cell and move on to the next cell to duplicate the process.

So, when we talk about “killing” a virus, we’re really talking about inactivating them by breaking down their structure.

This is why soap works so well. Coronaviruses are held together by a lipid (fatty) coating. Soap, being amphipathic (meaning it can dissolve most molecules) dissolves this fat membrane, causing the virus to fall apart and become harmless.

More specifically, the fat-like substances in soap are structurally similar to the lipids found in the virus membrane, so the soap molecules compete with and replace the fats in the membrane. In so doing, the ‘fatty glue’ holding the virus together dissolves.

Hydrogen peroxide works in a similar way. As noted by Levy, “the way to control any viral infection is not to kill the virus; rather, the infected cells that have been turned into viral factories must be killed.”

“At the low physiological levels in the nanomolar range, H2O2 is the major agent signalling through specific protein targets, which engage in metabolic regulation and stress responses to support cellular adaptation to a changing environment and stress …

Accordingly, major advances have occurred in understanding the role of these oxidants in physiology and disease, including the nervous, cardiovascular and immune systems, skeletal muscle and metabolic regulation as well as ageing and cancer.

In the past, unspecific elimination of ROS by use of low molecular mass antioxidant compounds was not successful in counteracting disease initiation and progression in clinical trials. However, controlling specific ROS-mediated signalling pathways by selective targeting offers a perspective for a future of more refined redox medicine.”

In short, hydrogen peroxide is a major ROS, but while ROS are typically thought of as “all bad,” this is a gross over-simplification. As noted in this paper, blanket elimination of ROS is inadvisable as they actually serve important signaling functions. The paper, which is behind a paywall, further explains:9

Contrary to oxidative stress or oxidative distress, oxidative eustress denotes an oxidative challenge that has positive or beneficial effects and is essential in redox signalling.

Hydrogen Peroxide Has a Long History of Medical Use

As explained in a British Journal of Pharmacology paper published in 2012, which sought to assess the therapeutic potential of hydrogen peroxide in the treatment of ischemic stroke:

“… in light of recent findings, [hydrogen peroxide] is being recognised as a ubiquitous endogenous molecule of life as its biological role has been better elucidated. Indeed, increasing evidence suggests that H2O2 may act as a second messenger with a pro-survival role in several physiological processes …

The presence of H2O2 in living systems was identified in 1856. However, it was only in 1894 that 100% pure H2O2 was first extracted … In 1888, the first medical use of H2O2 was described by Love as efficacious in treating numerous diseases, including scarlet fever, diphtheria, nasal catarrh, acute coryza, whooping cough, asthma hay fever and tonsillitis.

Similarly, Oliver and collaborators reported that intravenous injection of H2O2 was efficacious in treating influenza pneumonia in the epidemic following World War I. Despite its beneficial effects, in the 1940s medical interest in further research on H2O2 was slowed down by the emerging development of new prescription medicines …

Notably, Farr is generally considered to be the pioneer of ‘oxidative therapy’ by proposing intravenous infusion of H2O2 to treat a wide variety of diseases. Later, Willhelm promoted the therapeutic use of H2O2 to treat cancer, skin diseases, polio and bacteria-related mental illness.

He defined H2O2 as ‘God’s given immune system.’ Another player in the H2O2 story was Grotz, who obtained pain relief by testing H2O2 on himself to treat his arthritis pain.”

As you can see, while Farr has been labelled a quack by some critics, other scientists and researchers are not so quick to dismiss his contributions to medical science.

What Do Studies Say?

The most relevant study was one that was done earlier this year in the Journal of Hospital Infection. The studies used 0.5% hydrogen peroxide, which is six times weaker than the 3% typically used, and found that it killed human corona viruses and SARS corona viruses and MERS.

Studies have also looked into the use of hydrogen peroxide against a variety of pathogens, including a 1994 study in Poultry Science, which found a micro-aerosolized mist of 5% hydrogen peroxide “completely inactivated infectious laryngotracheitis virus.”

Another study, published in the American Journal of Infection Control in 2009, assessed the efficacy of vaporised hydrogen peroxide against viruses on various surfaces, finding exposure to hydrogen peroxide vapour at a concentration of 10 parts per million resulted in 99% inactivation after 2.5 minutes.

According to the authors, “Hydrogen peroxide vapour was virucidal against feline calicivirus, adenovirus, TGEV and avian influenza virus at the lowest vaporized volume tested (25 mL).” Vaporized hydrogen peroxide was found to completely inactivate a range of exotic animal viruses in a 1997 study as well.

Hydrogen peroxide’s ability to inactivate dangerous infectious viruses has also been highlighted in vaccine science. As noted in a 2016 study in the Vaccine journal, 3% hydrogen peroxide completely and irreversibly inactivated the rabies virus within two hours, thus reducing time and cost of the inactivation process required for the making of a rabies vaccine (which contains inactivated rabies virus).

Why Use a Nebulizer?

The therapy touted by Farr involved administering hydrogen peroxide intravenously. This, however, puts the therapy out of reach for most who want a quick and easy remedy to use at home. A far more inexpensive and convenient alternative is to inhale the hydrogen peroxide mist, using a nebuliser — a small, handheld device that converts liquid into a very fine mist.

The microscopic mist, similar to smoke or vapour, can be comfortably inhaled deep into your nostrils, sinuses and lungs. While nebulisers have routinely been used by asthmatics to deliver medication into their lungs, this delivery system affects not only the lungs but your entire body.

As noted in the 2002 review article, “Pulmonary Drug Delivery Systems: Recent Developments and Prospects,” “Targeting drug delivery into the lungs has become one of the most important aspects of systemic … drug delivery systems.”

In the case of respiratory infections, the nebuliser has the added advantage of delivering the hydrogen peroxide right to the areas most affected by respiratory viruses — your sinuses, throat, bronchial tract and lungs.

“Effective hydrogen peroxide nebulisation quite literally, ‘chops the head off of the snake,’ and the virus present elsewhere in the body can then readily be mopped up when the new virus influx has been terminated,” Levy says, adding:

“It should be kept in mind that hydrogen peroxide kills pathogens very readily upon contact in an open wound. It should, therefore, be understandable why putting a fine mist of hydrogen peroxide in all the areas of maximal viral replication promptly puts the body on a pathway to rapid healing.”

To prevent an infection from taking hold, begin treatment at first signs of symptoms. Commercially available 3% hydrogen peroxide is fine for this purpose, and can be used without dilution.

If you’re already presenting with runny nose or sore throat, Levy recommends using the nebuliser for 10 to 15 minutes four times a day until your symptoms are relieved. You can also nebulised hydrogen peroxide for prevention and maintenance, which may be advisable during flu season, or while the COVID-19 pandemic is in full swing. Levy notes:

“As it is a completely non-toxic therapy, nebulisation can be administered as often as desired. If done on a daily basis at least once, a very positive impact on bowel and gut function will often be realised as killing the chronic pathogen colonisation present in most noses and throats stops the 24/7 swallowing of these pathogens and their associated toxins.

If daily prevention is not a practical option, the effectiveness of this treatment is optimised when somebody sneezes in your face or you have just got off the plane after a long flight. Don’t wait for initial symptoms. Just nebulise at your first opportunity.”