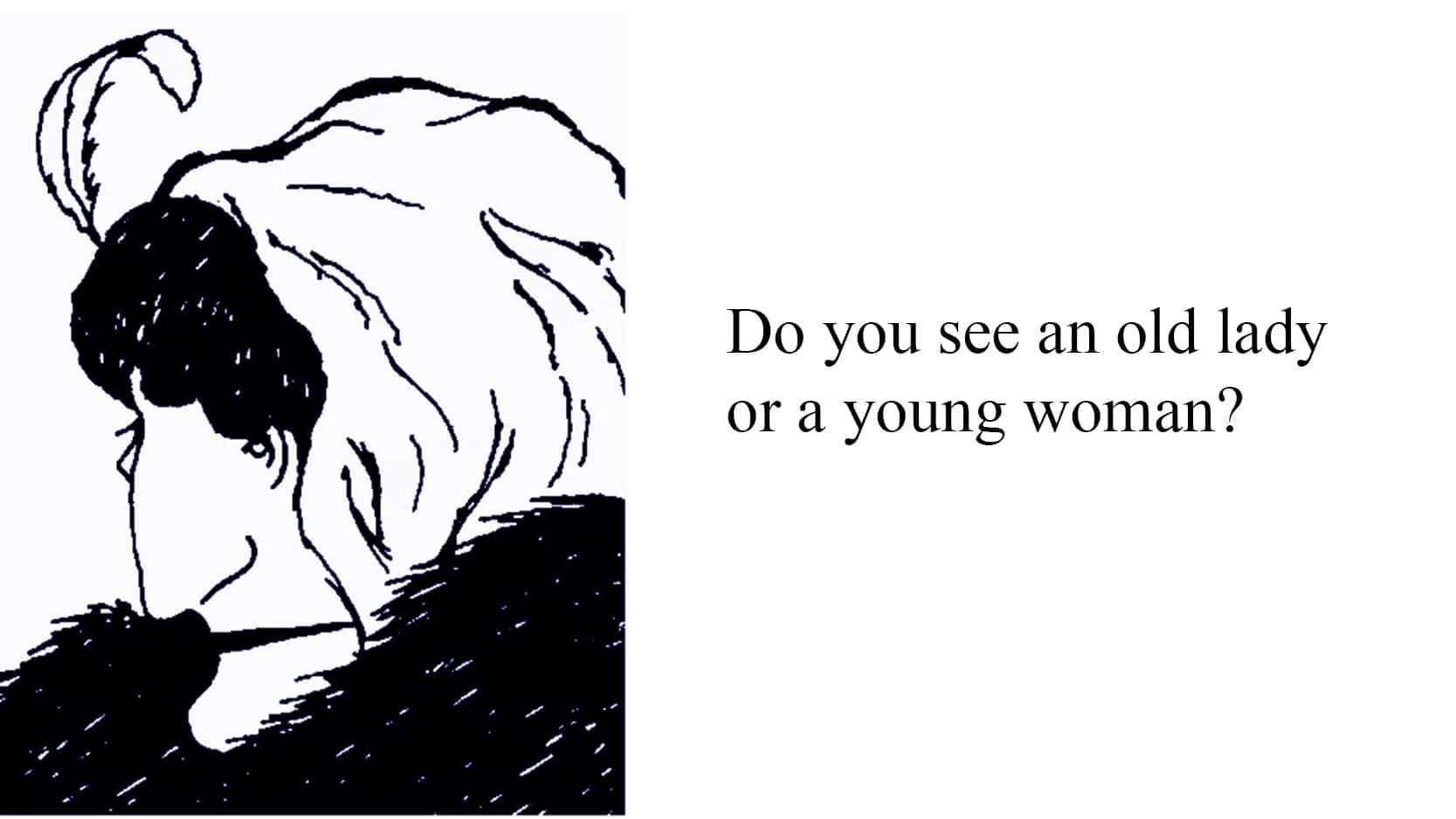 Seeing is believing. To some extent, that’s true, of course: Our eyes allow us to see what’s around us, helping us navigate our world. But it turns out sight is much more complicated than that. What we perceive in any given moment is not only determined by sensory input, but by our personal physical abilities, energy levels, feelings, social identities, and more.

According to a new book Perception: How Our Bodies Shape Our Minds by University of Virginia psychologist Dennis Proffitt and Drake Baer, it’s common sense to believe we experience the world as it objectively is. “Even though our naive intuitions are that we see the world as it is, we do not,” he says.

It’s not just our eyesight that’s influenced by unconscious processes either. Proffitt and Baer’s book is chock full of fascinating research findings that challenge not only the things we perceive, but the judgements and decisions we make based on what we perceive.

Things that seem true and universal are often just our own unique experience of the world.

This is useful to know—especially now, when we are fighting a deadly pandemic and mired in political and social turmoil. If we understand what irrelevant factors manipulate what we see and think, we can perhaps find ways to overcome these influences and make better decisions as a society.

“If we are going to have a better understanding of ourselves and our fellow human beings, we need to appreciate the startling individuality of everyone’s experience,” write Proffitt and Baer. That means having humility. Here are eight of the many interesting take-home messages from their book.

1. Our Energy and Abilities Impact Our Perspective

Several studies by Proffitt and others show that our physical bodies and our ability to move influence how we view our surroundings. For example, researchers have found that if you are obese or tired, distances look farther to you. People wearing heavy backpacks see steeper hills in front of them than those without backpacks.

“Put another way: Our walking ability shapes the apparent walkability of the hill, which determines how we see it. You do not see the hill as it is but rather as it is seen by you,” write Proffitt and Baer.

If you are holding something that extends your reach, things appear closer to you too. In sports, successful baseball batters literally see bigger balls coming at them from the pitcher, and golfers who putt see bigger holes.

This phenomenon is obvious even in young babies. That’s why, in one experiment, crawling babies showed fear when they were lowered onto a platform with a fake cliff (an apparent drop-off that was actually see-through plastic), but babies who couldn’t crawl didn’t show that same fear. They didn’t see it as scary, because, as non-crawlers, they didn’t need to worry about cliffs yet.

2. Our Body Awareness Affects Our Decisions

In one experiment, researchers studied hedge fund managers who have to make quick decisions about stock trading under intense pressure. Their strange finding? Managers who could more accurately count their own heartbeats without touching their bodies were more successful traders.

People who were more confident in their accurate count, however, were not more successful, and the bigger the gap between their confidence and accuracy, the higher their anxiety.

This suggests that actual awareness of your body can be useful in high-stress work situations.

While it’s uncertain why that would be, it’s possible that people who are more aware of their heartbeats are better able to calm themselves under stress and, therefore, make cooler decisions. Or it could be that successful people who are more attuned to their bodies interpret their perceptions more accurately, understanding how the two interact. Either way, these findings make a case for cultivating greater body awareness.

3. Being Hungry (or not) Changes Our Choices

Our body’s energy levels also impact decision-making. In one experiment, participants who drank a sugary drink made better decisions and delayed immediate gratification longer than people who gulped down a sweet-tasting drink without glucose. Similarly, when judges make parole decisions just before their lunch breaks or the end of their day, they tend to deny parole. That’s because a decision to grant parole requires more careful consideration—and so, more energy.

Studies have also found that people who’ve enjoyed a tall, sugary glass of lemonade tend to be more helpful to others. And children who eat breakfast do better in school and have fewer behavioural problems.

“The way you think is endlessly tied to how you physically feel,” write the authors. So, it’s important to make sure we (or others we rely on) are not too depleted when hard decisions need to be made.

4. Easy-To-Read Statements Seem More True
Our beliefs about the world also depend on seemingly irrelevant influences. In one experiment, when researchers asked participants to determine the truth of a statement—like “Lima is in Peru”—written in different colours, participants agreed more with easy-to-read statements than less easy-to-read ones.

This tendency can be undone if you simply point it out to people. But, otherwise, these forces operate below conscious awareness, and we can be duped by how easy something is to believe or retrieve in our minds.

“Our penchant for fluency makes us susceptible to bullshit—if it feels right, it is right—and when that vulnerability is scaled up to the level of media, you get truthiness fake news,” the authors write.

5. Our Feelings Affect Our Political Views

It’s probably not surprising that our feelings affect our perceptions and thoughts. Still, even for someone like me who knows this research well, Perception held some surprises.

In one study cited in the book, researchers found that people who are more easily disgusted—when imagining things like a garbage pail filled with maggots or a piece of chocolate cake in the shape of dog poo—tend to be more conservative politically. And they tend to have stronger negative feelings about people who support sexual freedoms they disagree with—like gay rights or the right to an abortion.

Feelings like disgust—which come out of the limbic system of our brains, often below conscious awareness—guide our reactions and evaluations, making them less than impartial.

“Emotions allow us to perceive good and ill in a world filled with both. They may seem to come unbidden, but they are, in fact, of our own creation, and they possess both the wisdom and vicissitudes of our oldest and most fundamental brain structures,” write Proffitt and Baer.

Anyone who’s ever felt sad or depressed knows it’s hard to face the world when you’re down. But it’s interesting to note that these feelings also change our sensory perceptions. For example, people listening to melancholic music tend to think a hill looks steeper than people listening to happy music.

“Emotions . . . have the job of giving a red or green light toward approaching or avoiding objects, people, and situations, and shape perception accordingly,” write Proffitt and Baer.

That means that nurturing our positive emotions may help us to approach difficult tasks more easily—an idea that at least some research bears out.

7. Having Other People Around Makes Things Seem Easier
The presence of other people affects our perception in difficult situations, too. Holding hands with someone while experiencing a painful event can lessen the pain. Anticipating having to carry a heavy load with someone else (as opposed to alone) makes it appear lighter, and just thinking about a friend can make hills seem less steep.

Our social connections seem to play a role in reducing stress, which might be why being with others changes our perception of pain or difficulty, making them both easier to bear. These studies and more point to the centrality of our social relationships for resilience when things are hard.

Another fascinating finding is how our group affiliations, like the political party we belong to, affects our perceptions. For example, in one study, people were asked to solve maths equations to verify the truth of a research finding—like whether a vaccine is effective or whether banning guns saves lives. As predicted, people with greater maths skills were able to figure out the answers more easily—but only when the result of the calculation didn’t contradict their political beliefs. If it did, everyone’s maths was worse: They solved the problem correctly 25 to 45 percent less often.

This flies in the face of the idea that people just need more information to figure out the truth of a situation. “Thinking—even doing maths—is not a process happening in isolation but is instead embedded in our personal thoughts and group identities,” the authors write.

“We literally become flummoxed, stupefied, and incapable of wielding our full faculties when confronted with facts that threaten our social identity.”

All in all, reading about this research should humble us. Clearly, many forces below our conscious awareness affect our perceptions, thoughts, and decisions, and errors abound.

Becoming cognisant of those influences could keep us from making costly misjudgements or creating unnecessary conflicts with others who see things differently. The ultimate benefit of that? Hopefully, having a little humility might help all of us to act with less hubris and be more open to other points of view.

*For more information, please visit the below website.
www.greatergoodberkeley.edu