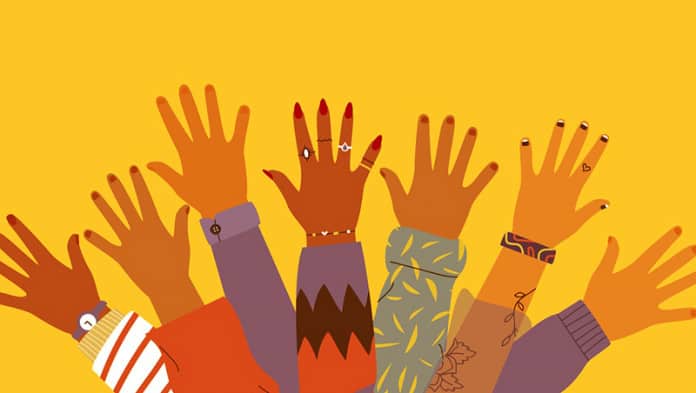 A new study finds that people in diverse communities feel a greater sense of commonality with others, and have greater wellbeing. How does living in a diverse community affect how we think about others?
Researchers who study this have two basic theories. On one hand, diversity can strengthen stereotypes because of “confirmation bias”—our tendency to look for information that confirms what we already believe. In other words, if we have negative, preconceived notions about different ethnic groups, we may selectively pay attention to details in our encounters with them that corroborate our beliefs, creating greater animosity and distrust and making it harder to feel a sense of shared purpose and identity.

On the other hand, diversity can reduce stereotyping, because having more contact with people from different ethnicities helps us see that we are all more alike than different. Our preconceived notions might disappear as we experience people as individuals with multiple interests and identities, allowing us to find commonality with one another.

So, which theory is more correct? A new study aimed to find out.

Researchers considered data from 46 countries around the world (with varying levels of diversity) showing how people rated different ethnic groups within their country on their levels of warmth and competence. This gave researchers a measure of commonality – how much people saw themselves as similar to versus different from others.

After analysing the data, they found people living in places with more diversity experienced a stronger sense of commonality than those living in less diverse places—a finding that coauthor Bai Xuechunzi didn’t necessarily expect, but was happy to report.

“The more we’re exposed to diverse groups, the more we’re going to find that they’re actually not that different from ourselves,” she says. “It seems that living in a diverse environment can change the stereotypes about others that may come from living in a homogenous environment.”

Co-author Susan Fiske was more surprised than Xuechunzi by the results, given her prior work on stereotyping.

“I thought as diversity increased, people would develop stereotypes, and that if you don’t have any exposure to different groups, you don’t really know much about them and don’t even stereotype them,” she says. “I was happy to be wrong.”

To corroborate their finding, the researchers also surveyed over 1,500 Americans coming from all 50 states to see how diversity affected their perceived similarity to others. They found the same basic result: The more diverse a state was, the stronger the sense of commonality among ethnic groups. The age, gender, social class, group identity, residence (i.e., rural or urban), and personal wellbeing of the people surveyed did not affect these results.

Xuechunzi says that this likely reflects the strong influence our environment has on how we create mental maps of those around us—strong enough to overcome the societal messages that otherwise might encourage stereotyping.

But, to further test this idea, she and her colleagues did one more study: They surveyed American college students at two points in time – just after graduating high school and again after finishing college – to see if their sense of similarity to others would change as they moved from one environment to another.

Again, if the students moved to a more diverse learning environment, their sense of commonality with others increased. This strengthened the argument that diversity reduces stereotypes. Though Xuechunzi says that they can’t rule out other reasons for this finding—such as social norms that people encounter in different settings—it is encouraging.

“Diversity actually leads people to find more commonality; so, we can say that promoting diversity is probably a good thing,” she says.

Somewhat surprisingly, she and her colleagues also found that those students who felt higher levels of commonality with others rated all groups as warmer and more competent – and they reported feeling greater life satisfaction.

“This suggests a link between how we perceive others and our emotions,” says Xuechunzi.

While some past research has suggested the opposite – that increasing diversity in a community makes people uncomfortable and unhappy, at least initially, it seems that in the long run people feel better in diverse communities.

“If you see your connections with other people, it increases your wellbeing,” says Fiske. “I’m sure there are people who won’t go there – maybe they’re frustrated, angry, and pessimistic. But the majority of people do, we found.”

Fiske feels hopeful that these findings suggest you don’t have to create complicated webs of interdependence to decrease stereotyping – meaning, there doesn’t necessarily have to be equal status and rewarding experiences between diverse groups in order for contact to reduce prejudice.

Instead, she says, simply living in a more diverse place and running into people at the supermarket or coffee shop or church, may naturally make us consider people from different groups more alike than different, if we give it time.

“If nothing terrible happens, if you don’t have a civil war or a demagogue for a leader who exacerbates tensions, people get used to each other,” she says. “It doesn’t mean that you love everybody or get to know them well. But you do see them as similar to you, and that’s reason for optimism.”

*For more information, please visit the below website.
www.greatergood.berkeley.edu.au