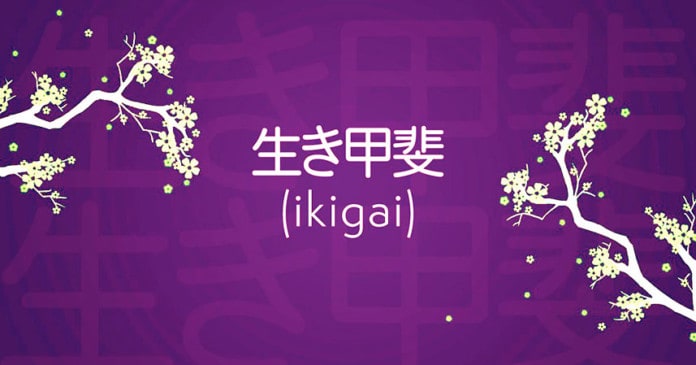 Most people want to live a long life. According to a longevity survey conducted by the Stanford Center, 77% of respondents said they would like to become centenarians.

More people are exercising, eating healthy, taking supplements, and watching for breakthroughs in the space of anti-ageing and regenerative medicine to extend their longevity. Diet and exercise are certainly well-documented as being vital for health and wellness, but science has also shown there is another factor that most often gets overlooked: a sense of meaning and finding purpose.

Some studies suggest that those who believe their existence has meaning have lower levels of the cortisol stress hormone, and they also have more favourable gene expression related to inflammation.

One study found that if a 90-year-old with a clear purpose in life develops Alzheimer’s disease, that person will probably keep functioning relatively well even with pathological changes in the brain.

A meta-analysis of 10 studies involving over 136,000 people found that having a purpose in life can help lower the risk of mortality by 17%, which is the equivalent of following a Mediterranean diet.

In Japan, where the nation’s life expectancy is about 84.2 years, scientists and centenarians talk about diet and exercise behind their longevity, but those same conversations also focus on ikigai, which translates roughly to having a purpose in life or a life worth living. Japan’s Ministry of Health, Labour and Welfare believe that Ikigai has measurable effects on longevity, so much so that the agency has included it in the nation’s official health promotion strategy.

In one epidemiological study involving over 43,000 Japanese, not having ikigai was linked to a 60% increased risk of dying from cardiovascular disease.

(In contrast, consuming plenty of fruit and vegetables on a daily basis can help to decrease the risk of dying from cardiovascular disease by 27%.)

Ikigai can be seen as taking care of children/grandchildren/grandparents, volunteering, looking after the garden, helping to keep the street clean, having a job, shopping for a neighbour, and being part of the local community. This concept doesn’t translate very easily into Western culture, but research has shown that the related concepts of purpose and meaning in life can also have a significant impact on physical wellbeing.

“In the last 10 to 15 years, there has been an explosion of research linking wellbeing in its many forms to numerous indicators of health. When that work [began], we didn’t know that purpose in life would emerge as such an important predictor of numerous health outcomes,” says Carol Ryff, a psychologist at the University of Wisconsin-Madison, and director of the MIDUS (Midlife in the United States) national study of Americans.

Research suggests that those with high levels of a sense of purpose spend fewer nights in hospital, have lower odds of developing diabetes, and over two times lower risks of dying from heart conditions.

It has been hypothesised that having a higher purpose gives people more will to stay alive and science seems to be support that, as research indicates that those with a purpose in life are more likely to keep active and look after their health. Even after controlling for health-related behaviour, the strong effects of meaning on longevity still remained.

Part of the reason may be that having a purpose in life affects our stress response. To test this, in lab experiments when subjects were given anxious stress markers, levels of the hormone cortisol tended to spike. But those who reported having high levels of purpose tended to calm down more quickly, according to Eric Kim, a psychologist at the University of British Columbia.

Research utilising functional MRI scans have reported similar stress-buffering effects, finding that those with high levels of purpose when shown negative images do not have as much activity in their amygdala brain fear centre as those with a lower sense of purpose.

According to the CDC however, having or searching for a purpose in life isn’t exactly straightforward. One of the challenges may be in defining the thing or place to begin with, having a sense of direction, and setting goals and objectives in a precise way, rather than wandering aimlessly throughout life.

The good news is that a sense of meaning and purpose can be boosted with simple interventions like volunteering, for example at the local animal shelter, food bank, soup kitchen, community clean up, or assisting people who need help with shopping or gardening.

“People do increase their sense of compassion and really do get new world views as they volunteer, that might actually help make the soul warmer,” says Kim, who also thinks that mindfulness or joining a group of people who share your values could also help you find meaning.

Difficult times may also offer some unique opportunities for finding purpose. A study conducted by IPSOS found that almost half of Americans checked in on elderly or sick neighbours in the past year, with 20% potentially exposing themselves to the virus in order to help other people. One survey found that 57% of the respondents reported that they were re-evaluating their lives.

Many cities and towns in France experienced people clapping and banging on pots to cheer in support of doctors and nurses for 52 days straight regardless of the weather. Those partaking reported feeling connected and having a purpose in providing support for those who were helping to save patients.

There are many ways to find purpose and meaning in life, and if the science is right, in doing this not only will we be happier but we could end up being more healthy and live longer. After all, what is the point of living longer if we aren’t healthy and happy?