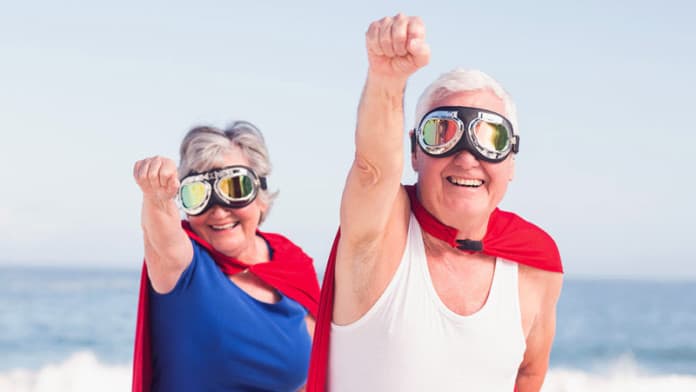 As we age, our brains typically undergo a slow process of atrophy, causing less robust communication between various brain regions, which leads to declining memory and other cognitive functions. But a rare group of older individuals called “superagers” have been shown to learn and recall novel information as well as a 25-year-old.

“This is the first time we have images of the function of the brains of superagers as they actively learn and remember new information,” says Alexandra Touroutoglou, PhD, director of Imaging Operations at MGH’s Frontotemporal Disorders Unit and senior author of the paper published in Cerebral Cortex.

In 2016, Touroutoglou and her fellow researchers identified a group of adults older than 65 with remarkable performance on memory tests. The superagers are participants in an ongoing longitudinal study of ageing at the Massachusetts General Hopsital.

“Using MRI, we found that the structure of the brains of superagers and the connectivity of their neural networks more closely resemble the brains of young adults; superagers had avoided the brain atrophy typically seen in older adults,” says Touroutoglou.

Their first task was to determine whether the word matched the image, a process called encoding.

After 10 minutes, participants were presented with the 80 image-word pairs they had just learned, an additional 40 pairs of new words and images, and 40 rearranged pairs consisting of words and images they had previously seen.

Their second task was to recall whether they had previously seen each specific word-picture pair, or whether they were looking at a new or rearranged pair.

While the participants were in the scanner, the researchers paid close attention to the visual cortex, which is the area of the brain that processes what you see and is particularly sensitive to ageing.

“In the visual cortex, there are populations of neurons that are selectively involved in processing different categories of images, such as faces, houses or scenes,” says lead author Yuta Katsumi, PhD, a postdoctoral fellow in Psychiatry at MGH.

“This selective function of each group of neurons makes them more efficient at processing what you see and creating a distinct memory of those images, which can then easily be retrieved.”

During ageing, this selectivity (called neural differentiation) diminishes, and the group of neurons that once responded primarily to faces now activates for other images.

The brain has difficulty creating unique neural activation patterns for different types of images, which means it is making less distinctive mental representations of what the person is seeing. That’s one reason older individuals have trouble remembering when they may have seen a television show, read an article, or eaten a specific meal.

But in the fMRI study, the superagers’ memory performance was indistinguishable from the 25-year-olds’, and their brains’ visual cortex maintained youthful activity patterns.

“The superagers had maintained the same high level of neural differentiation or selectivity, as a young adult,” says Katsumi. “Their brains enabled them to create distinct representations of the different categories of visual information so that they could accurately remember the image-word pairs.”

An important question that researchers still must answer is whether superagers’ brains were always more efficient than their peers, or whether over time, they developed mechanisms to compensate for the decline of the ageing brain.

Previous studies have shown that training can increase the selectivity of brain regions, which may be a potential intervention to delay or prevent the decline in neural differentiation in normal ageing adults and make their brains more like those of superagers.

Currently, the researchers are conducting a clinical trial to evaluate whether non-invasive electromagnetic stimulation, which delivers an electrical current to targeted areas of the brain, can improve memory in older adults.

The researchers also plan to study different brain regions to further understand how superagers learn and remember, and they will examine lifestyle and other factors that might contribute to the amazing memory of superagers.