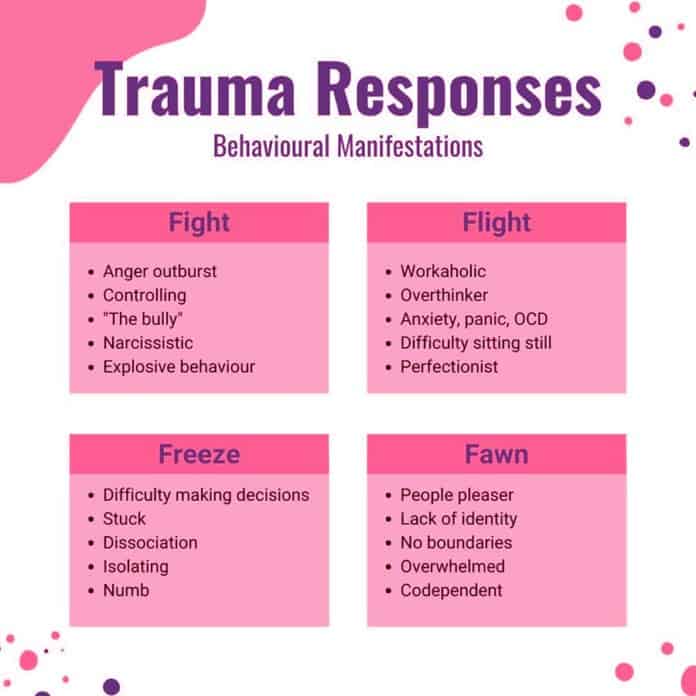 In the ancient past, it was useful for our ancestors to respond quickly to apex predators and escape with a fight-or-flight action. In modern society today, physical predatory threats are few and far between. However, the same evolutionary responses are still deeply embedded within our bodies. When there’s a situation the body deems to be unsafe, the limbic system – the part of your brain responsible for memory, emotions, and survival – acts as a base of operations. It automatically jumps into action with largely instinctive protective measures to safeguard you.

But what happens when there isn’t any danger around, and you still find yourself hypervigilant and activated, as if you’re unable to return to a baseline of relative security?

Trauma may be the invisible factor stimulating those overwhelmingly intense feelings and causing an over-reliance on survival instincts, sometimes referred to as a trauma response.

What Is A Trauma Response?

A trauma response is the reflexive use of over-adaptive coping mechanisms in the real or perceived presence of a trauma event, according to trauma therapist Cynthia M.A. Siadat. The four trauma responses most commonly recognised are fight, flight, freeze, fawn, sometimes called the 4 Fs of trauma.

“When we experience something traumatic or have been exposed to prolonged stress, it causes part of our brain, the amygdala, to go into hyperdrive where we see and feel threats in non-threatening situations,” licensed therapist ChiomaMoronu says. “This causes us to act in ways that we don’t understand and can leave us feeling that we no longer have control over ourselves. The [trauma] response is often based on what your brain thinks will help you survive the current situation.”

In a study about the neurobiological effects of psychological trauma, researchers note our bodies are designed to respond to perceived threats through a constellation of near-instantaneous, reflexive survival behaviour. Via a short-term strategy, chemicals are sent into our bloodstream to activate the sympathetic nervous system’s defences. But when stress responses are constantly triggered, there’s not enough time to metabolise the chemicals, and our nervous system overloads and dysregulates – putting us squarely into survival zone. The temporary defences become sustained as our body shifts into a state of sympathetic nervous system dominance.

The reality is that trauma exists across a continuum of stress. Little “T” events, sometimes called micro-traumas, can also be profoundly affecting since trauma is a subjective and individualised experience. For example, some traumatic stressors can include events such as a bad breakup, a betrayal of trust, a chronically abusive workplace, or undergoing something subtly frightening over a period of time. They may not feel particularly injurious, but the complex effects of trauma can still affect you significantly when it’s not emotionally processed and integrated – somatically, spiritually, and mentally. If it’s not resolved, trauma can essentially convert into stuck, frozen energy that your body will uniquely respond to physiologically in the form of a trauma response.

Healthy stress responses aren’t inherently bad as they helps you assert yourself in short-term situations. However, in the face of trauma, stress can be taken to the extreme and become something wearing and unhealthy for your body.

When healthy, the fight response can allow for assertion and solid boundaries. When unhealthy i.e. when used as a trauma response, it’s an active self-preservation function where you move reactively toward conflict with anger and aggression. It’s a fear state where you confront the threat to stand up and assert yourself.

“People who respond with fight are utilising conflict to navigate the situation,” Moronu explains. “A fight trauma response is when we believe that if we are able to maintain power over the threat, we will gain control. This can look like physical fights, yelling, physical aggression, throwing things, and property destruction. It can also look like balling your hands into fists, feeling a knot in your stomach, crying, being argumentative, or experiencing a tight jaw.”

If you notice yourself exhibiting the above behaviour, take a moment to slow down and think about how you are positioning yourself at the moment. It may feel good to access your physicality to gain mobility in the situation and have your insides reflect your outsides, but it comes at the cost of connection and others feeling secure around you.

“In order to release this, you can use deep breathing, warm baths, routines, mindfulness, and being [gentle] with yourself,” Moronu suggests. The fight response preps you to be physical, so you can also lean into exercise to allow the body to calm and achieve homeostasis.

By practising mindfulness and a burst of constructive activity like yoga or stretching, it activates your parasympathetic system. It releases anxiety and helps you sink back into the immediate environment so you feel safe to reconnect.

When faced with a dangerous situation, the flight response corresponds with avoidant behaviour. When you’re healthy, you’re able to be discerning in stressful situations and disengage within limits. However, as a trauma response, you take it a step further by isolating yourself entirely.

“The flight response is when we believe that if we are able to escape the threat and avoid conflict, then we will not be harmed. This can look like running away and avoiding interactions with others,” notes Moronu. To avoid uncomfortable feelings, you may escape the situation by staying busy or fleeing for the exit whenever things get tough.

To drop back into yourself, do things that create an immediate, visceral reaction with your body. Pay attention to any tense muscles and relax them to relax the mind.

Siadat recommends bodywork and intentional movements to halt the stress response so you can think about how you want to respond instead of your initial impulse to react.

Moronu advises coping techniques that are tactile and grounding, like drinking a warm beverage or eating crunchy food.

Moronu also encourages the importance of building connections with those around you, which increases feel-good, happy chemicals like endorphins and serotonin.

When healthy, the freeze response can help you slow down and appraise the situation carefully to determine the next steps.

When unhealthy, the freeze response relates to dissociation and immobilising behaviour. When this defence is enacted, it often result in literally ‘freezing’ – feeling frozen and unable to move or finding yourself spacing out as if you’re in a haze or detached from reality. You don’t feel like you’re really there, and you’re mentally checked out as you leave out what’s happening in your surroundings and what you’re feeling in an attempt to find emotional safety.

“A freeze trauma response is when parts of your sympathetic nervous system have reached a point of overwhelm causing a neurological shutdown,” Siadat says. “I liken this response to our animal friends who play dead in the presence of a predator. When we freeze, it might look like being at a loss for words, retreating into your mind, having a hard time breaking out and being present, sleeping, dissociating/spacing out, and going emotionally or physically numb.”

It’s the equivalent of temporary paralysis and disconnecting with your body to prevent further stress.

To counteract that loss of connection with yourself, Siadat recommends doing grounding exercises if you catch yourself starting to dissociate.

“My favourite one is what my own therapist taught me. I call it ‘See Red.’ Scan around your immediate surroundings for a red object. For me at the moment, I see my husband’s red hoodie. Then what I’ll do is focus my eyes on it, say red hoodie, and take one deep, slow breath. Then I’ll scan the room for a second red item and do the same. I repeat this five times. Doing this can help bring us back to our present moment and the environment we are currently in versus the environment we create when we’re in a trauma response that’s taking us out of the present moment.”

At its core, fawning is about people-pleasing and engaging in pacifying behaviour. It’s characterised by prioritising people above all else by doing whatever they want to diffuse conflict and receive their approval. It seems good to be well-liked and defer to others to secure safety, but not when it’s at the cost of losing yourself. It can reach a point where you abandon yourself and your needs by merging too thoroughly with others. Most likely, you don’t feel seen by others and may feel eclipsed by the people in your life.

“The fawn response is people-pleasing to the degree of forgetting yourself entirely; thoughts, emotions, body sensations,” Siadat says. “I know I’m encountering a fawn response when someone tells me what I’d like to hear and when I ask how they’re feeling, they respond ‘I’m OK, how are you?’ or ‘I’m all right, so-and-so did this to me, and I felt pretty bad.’ I’ll receive a brief response about how they’re doing and then a lengthier response about how someone else in their life is doing.”

If you’re noticing that you’re fawning often, be extra compassionate with yourself as you begin to separate what feelings belong to you and what belongs to other people. Observe yourself when you’re around others to add in buffering time to help prevent resorting to fawning. The first step is awareness and learning how to start putting up boundaries to take up space.

“Through my own work, I know that bringing it into my awareness when I’m doing it is challenging, and when called out, it can feel embarrassing,” Siadat says. “Know that your body and mind did what it needed to protect you but you can re-establish safety within yourself. You are capable and worth it.”

Can You Have More Than One Trauma Response?

Trauma responses don’t always neatly fit into a category. It’s likely you will primarily identify with one or two of the 4 Fs (depending on the situation-specific context you are in)but still toggle between them. For people who have suffered from severe trauma, responses pair up creating hybrids like fight/fawn and flight/freeze.

“Another factor contributing to our responses are the real or perceived consequences of our actions,” Siadat notes. “One trigger for trauma may elicit more of a fleeing instance, where another that’s present may want you to fight – an example of this is an age-old argument with a loved one where you both want to hang up the phone and yell. Or if you’re fawning, you want to tell them they are right and you are wrong just to keep the peace.”

If you identify with one of the 4 F trauma responses, know you’re not alone.

Siadat points to social support and journalling as self-soothing tools to learn about your behaviour, figure out how to better deal with tough situations, and move toward recovery.

“Noticing and then speaking about your trauma response to someone who cares for you, who won’t give unsolicited adviceand doesn’t leave you feeling judged can help a great deal. Our first step toward healthier living is identifying our current behaviour and then knowing in due time, we can make adjustments as we need to,” she says.

In tandem, embodied healing is integral to processing and feeling safe in your body. Managing your mental and physical health helps chart a new path forward to cultivate responses that attune to you healthily.

Moronu strongly recommends leaning on yoga to calm down the survival brain and looking for a trauma-informed therapist.

“Remember to show yourself grace, kindness, and compassion,” Moronu affirms. “You have been doing what is needed to survive. It will take time to unlearn some of this behaviour, and that’s OK.”
www.mindbodygreen.com