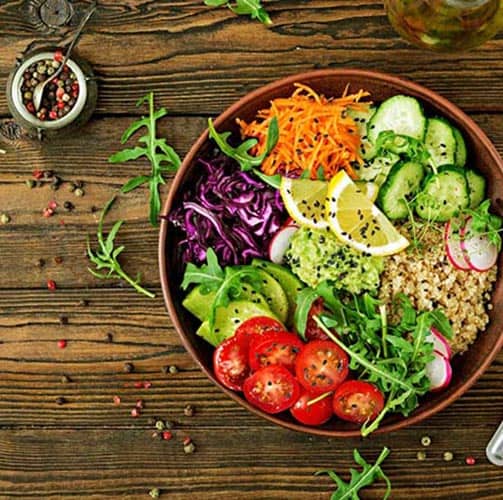 Veganism seems to be continuously getting more and more popular. This month marks World Vegan Month, kicked off with World Vegan Day on November 1st.

People opt to follow a vegan diet for a number of reasons, including the array of potential science-backed health benefits associated with the eating style. In fact, a study recently published in The American Journal of Lifestyle Medicine linked a vegan diet with health in seniors, through an interesting metric: polypharmacy.

The research investigated the link between diet and polypharmacy, where a person takes five (or more) prescribed medications, and found a vegan diet reduced the number of pills a person was prescribed by 58%, when compared to a non-vegetarian diet.

The study included 328 participants (all aged 60+), who answered questionnaires and went in for measurements at the Loma Linda University Drayson Center in Loma Linda, CA, which is one of the Blue Zones (five places in the world where people live the longest and are healthiest: Okinawa, Japan; Sardinia, Italy; Nicoya, Costa Rica; Ikaria, Greece; and Loma Linda, California).

Other factors that impacted the prevalence of polypharmacy included age, body mass index (BMI), and presence of pre-existing diseases, with BMI having a ‘significant’ impact on the number of prescriptions people had as well.

The Benefits Of Eating A Vegan Diet

Previously, plant-based diets have been associated with better heart health. Studies have found skipping meat in a diet can lower blood pressure and cholesterol, plus decrease the risk of developing cardiovascular disease.

A plant-based diet has also been linked to improvements in blood glucose levels for those with diabetes or pre-diabetes, and better digestion and gut health.

Given how integral all these systems are to overall health, and the fact that they sometimes are associated with medication, it makes sense that the diet and its subsequent health benefits may lead to a lower number of prescriptions.

Of course, a plant-based diet and a vegan diet are not exactly the same: plant-based refers to eating a lot more plants, and focusing on whole foods, but not necessarily cutting out meat entirely—while a vegan diet may include processed foods that are vegan-friendly, but never include animal products.

For the most part, however, it seems following either of these diets can have a positive impact on overall health and wellbeing.