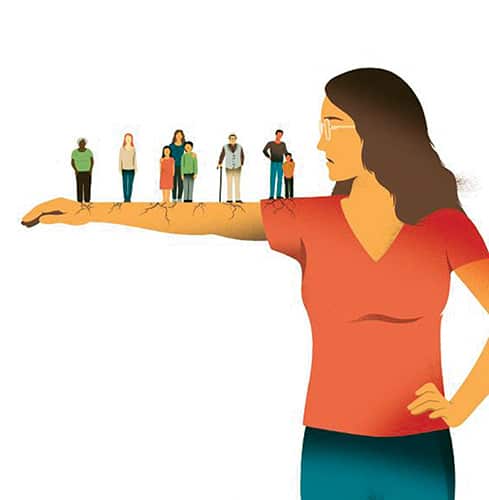 The son of unfailingly generous Ghanaian immigrants, business professor Isaac Addae always knew he wanted to dedicate his life to helping others. But a couple of years after launching his platform Conscious Conversation, Addae was swimming in an ever-denser fog of fatigue. He’d been running on a volunteer basis while working a full-time job and handling family commitments, and he knew he could no longer juggle all three long-term. He faced what seemed like an impossible decision—keep pushing himself beyond his mental and physical limits, or shut down the platform he’d worked so hard to build.

“My siblings and I were raised to be community-minded,” says Addae, of Nashville, Tennessee. In 2016, as social movements like Black Lives Matter were gaining traction, Addae founded a platform called Conscious Conversation to host community discussions on issues affecting people of colour.

As soon as Addae launched Conscious Conversation, it was obvious he’d tapped into an important community need. His Inbox served up a steady stream of new discussion requests. “I ended up doing a lot of lunch and coffee meetings to discuss issues,” Addae says.

He also put in hours of administrative prep work before each community event to make sure it ran smoothly. His events delved into timely issues like the state of K–12 education and the future of local health care systems, and community members heaped praise on him after each one.

But a couple of years after launching his platform, Addae was swimming in an ever-denser fog of fatigue. He’d been running Conscious Conversation on a volunteer basis while working a full-time job and handling family commitments, and he knew he could no longer juggle all three long-term. He faced what seemed like an impossible decision—keep pushing himself beyond his mental and physical limits, or shut down the platform he’d worked so hard to build.

Addae’s dilemma is one many committed helpers face: What do you do when once-nourishing helping efforts start to give you mental indigestion? Though activists and volunteers like Addae seem heroic in their drive to make a difference, says researcher and author Barbara Oakley, they can extend themselves too far, until their inner resources shrivel up—which, ironically, can scuttle longer-term helping efforts.

“On the plane, when the oxygen comes down, you’re supposed to put it on yourself before you help others,” says Oakley, a co editor of Pathological Altruism. “However it’s not a bad thing to turn your empathy off sometimes.”

The Rewards Of ‘Healthy Selfishness’

If you’re someone who, like Addae, stakes key parts of your identity on being generous, you’re likely aware that givings benefits can flow to the giver as well as the receiver.

Studies show that dedicated altruists are healthier and go on to lead longer lives.

Yet experts recognise that these effects depend on maintaining a healthy balance between selflessness and self-care.

When psychologist Abraham Maslow studied groups of what he called “self-actualising” people—those who had mastered the art of thriving and putting their talents to best use—he noted that they almost always had such a balance in place. “We find in our subjects a healthy selfishness,” he wrote, “at the same time great respect for the other and great respect for oneself.”

More recent research underscores the rewards of healthy selfishness. Columbia University psychologist Scott Barry Kaufman and his team report that when people score highly on a pathological altruism scale—which includes items like “I have little time to myself because I am so busy helping everyone,” they are more likely to suffer from depression.

However, when they score well on a healthy selfishness scale with statements like, “Even though I give a lot to others, I know when to recharge,” they have higher levels of wellbeing, as well as a true desire to help others with no strings attached.

An Addiction To Giving

It’s one thing to understand in principle that giving too much is counter-productive, draining your energy levels and your desire to help. But in practice, achieving an ideal giving balance is tricky because there are so many incentives—both social and biological—for giving until it hurts.

In part because many communities depend heavily on volunteer efforts to function, people tend to have strong prejudices against the idea that it’s possible to give too much. When Oakley told one big-name scientist she’d worked on a book about the dark side of giving, he huffed, “Altruism can never be pathological!”

This giving-is-good credo is so culturally ingrained that it can compel us to act against our own interests. As Addae considered pulling out of the Conscious Conversation project, he found himself resisting his desire to reclaim his own time. “I felt guilty,” he says, “because I knew that I was fulfilling a need in my community.”

Our brains also work in ways that reinforce social expectations around giving. Studies of neural activity during giving support a theory as old as Darwin: We are fundamentally wired to want to help others. Giving engages the brain’s mesolimbic reward system, which churns out the neurotransmitter dopamine—the same brain chemical that floods in when you have sex, snort cocaine, or eat a sumptuous meal. It’s easy to get addicted to the rewarding dopamine bursts you get when you help, especially when people praise you for your efforts.

While this is fine, even beneficial, if you can balance generous pursuits with other activities, reward-seeking for giving can get out of control just as with any other addiction. Almost without realising it, some pathological givers start to chase the dopamine bursts that accompany helping, sacrificing their health and wellbeing in the process.

People who are highly attuned to others’ feelings may be more vulnerable to getting trapped in this unhealthy giving cycle, Oakley notes.

“They really have an innate desire to make other people happy,” she says—which can make them feel inordinately distressed if they’re not putting others first. “Your own empathy can get you to do things you shouldn’t be doing.”

If you’re stuck in an over-giving rut, getting out will involve asserting yourself in ways that may feel distinctly uncomfortable—especially if you’re used to going to extreme lengths to please.

In her early teaching years, Oakley went out of her way to help her students tackle any academic issue, minor or major. “I was really trying to be a very good teacher,” Oakley says. “But I was inadvertently training them to use me to help them solve all their problems.”

Once Oakley realised her above-and-beyond approach was sapping her energy to handle other matters, she thought about how she might ratchet down her involvement while still supporting students. When she started asking her students to approach other class members for help before they contacted her, the tide of requests began to recede, and she had more energy to help students with truly urgent needs.

Similarly, you can extricate yourself from over-helping in ways that empower the people you’re trying to assist. If you’ve been driving a friend to appointments three times a week, you can encourage them to set up a regular schedule with a community-supported ride-sharing service.

Questioning your long-held assumptions about giving can also help you break out of a pathological cycle.

Oakley points out that we often make helping decisions based on what psychologist Daniel Kahneman calls “fast thinking”—snap judgements based on superficial ideas about generosity (“helping makes you a good person,” for instance). Once we make those snap judgements, they tend to crystallise in our minds as “right responses,” leading us to cherry-pick data that supports them.

To reassert balance, try orienting yourself toward Kahneman’s “slow thinking” approach. Take time to evaluate whether a helping opportunity fits with your other commitments and explore how you actually feel about it. “If I’m a little bit resentful, I can tell, ‘Well, that’s a no,’” Oakley says. “It works out pretty well.”

As you decide, your own mental limits should remain at the forefront, since a healthy giving balance might look different for you than it would for someone else. Your colleague might thrive on teaching middle school workshops gratis several days a week. But if you’re an introvert, that pace might leave you feeling more burned out than inspired.

After agonising over Conscious Conversation’s future, Addae finally arrived at one of the toughest decisions he’d ever made: He would step down from his role in the organisation. “The way I was going about it wasn’t sustainable,” he says. “I had to start putting myself first.”

While Addae maintains the Conscious Conversation website as an archive of dialogue topics, he no longer takes requests to host new talks. For now, he’s safeguarding his own wellbeing and pursuing more manageable ways to help, like mentoring local entrepreneurs. As a result, he’s felt his energy and zest for giving start to return.

“Before I can give to those in need,” he says, “I have to sustain the things that sustain me.”