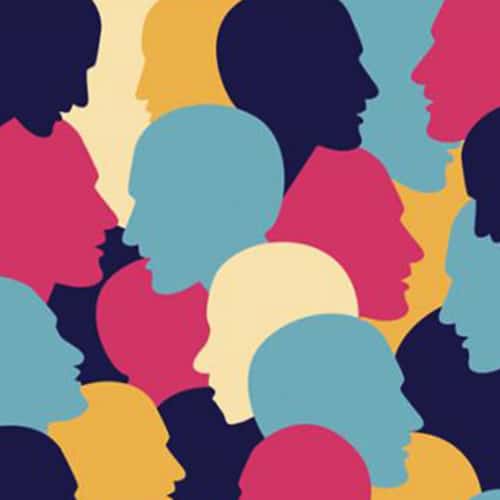 Today, people in the United States know far more about mental illness than previous generations. They are much more likely to understand that most of us will experience some form of mental illness in our lifetimes, such as depression or anxiety, and they know that smaller numbers of people will experience more severe conditions like bipolar disorder, schizophrenia, or PTSD. Despite this progress, for decades attitudes toward people with mental disorders have hardly budged.

How do we know this? One of the crucial ways we measure prejudice is to ask about “social distance.” In this case, that involves asking: How close would you be willing live to someone with a mental illness? Would you live in the same state? Be in the same classroom or workplace? Participate together on a project? Ride next to them on public transportation? Go out with them? Let your offspring marry them?

When friends, family, and society shame people for their illness, and shun them, that’s stigma.

This shaming can take many forms, from stereotypes (“they’re dangerous”) to moral judgements (“you’re just a coward”) to dismissive labelling (“you’re crazy”).

There can be real consequences of stigma, such as lost job opportunities and social marginalisation, as well as giving up on seeking treatment.

Overt discrimination is a big part of stigma, too: People with mental disorders, in many states, cannot run for office, serve on a jury, keep a driver’s license, or retain child custody. Most perniciously, the stigma of mental illness can lead people to hide their troubles and refuse to get help, which is likely to worsen their condition and create a vicious cycle.

Until very recently, studies consistently showed that the desire for social distance from people with mental illness had not improved over the past 50 to 60 years.

In fact, in some ways it had actually worsened, as more people than before automatically linked mental illness with aggression and violence.

At the same time, studies also showed that people had greater knowledge of ADHD, depression, bipolar disorder, PTSD, and more – but just ‘knowing’ more facts about mental illness can actually make things worse. For example, if you learn that people with schizophrenia may hear voices and become paranoid, you might consider that to be quite frightening, even threatening. Similarly, understanding that people with severe depression may come to feel that their lives are not worth living, and may therefore consider suicide, can trigger the belief that such individuals are self-centred. What might not be understood is that severe depression can foster the belief, in people affected, that everyone else would be better off without them.

A recent study published in December by the JAMA Network Open suggests that things may finally be starting to change. But the picture is complicated: Some kinds of illness are becoming less stigmatised true, but people still want to keep their distance from other forms.

The good news is that young people are much less likely to stigmatise mental illness than older generations – and there are specific steps we can take, as individuals and as a society, to keep making progress.

In surveying a representative group of U.S. adults during a period of over two decades, sociologist Bernice A. Pescosolido and her colleagues found a significant and important decrease in desire for social distance related to depression over the past few years.

That is unprecedented, and of real importance. However, in the same paper, the researchers found that attitudes related to conditions like schizophrenia and substance-use disorders did not show any signs of improvement – they had actually worsened.

Even though the study was of over 4,000 adults, it will take even larger groups to understand how socioeconomic, ethnic, or racial characteristics affected changing attitudes toward mental illness.

Still, from this study and a number of others, it does appear that improvements are driven mainly by younger people.

In fact, research hints at a massive generational shift in how mental illness is perceived and socially experienced.

Multiple surveys and studies suggest that both millennials (those born from the early ’80s to the mid-’90s) and Generation Z (who were mostly born in the 21st century) are much more accepting and knowledgeable about mental illness than previous generations.

Why? Rates of diagnosed mental illness have been rising among young people. For example, one 2019 study found almost half experience depression, peaking at 60% for teens aged 14–17, which is considerably more than previous generations.

When the CDC surveyed almost 8,000 high school students in the first six months of 2021, researchers found that depression, anxiety, and other disorders permeated the lives of adolescents during the pandemic.

All groups reported more persistent sadness since Spring 2020, though the rate rose faster among white teens than others.

Nearly half of lesbian, gay, bisexual, and transgender teens reported seriously thinking about suicide, compared with 14% of heterosexual peers. One in four girls did so, twice the rate of boys.

Did that translate into higher suicide rates? Yes, and decidedly so, especially for girls. Some emergency departments have reported a significant increase in teens coming in for suicide attempts. (Note that these numbers are only provisional and could go up with time.)

What’s Responsible For These Negative Trends?

That’s a topic hotly debated by scholars, with most suggesting some combination of factors like the pandemic, climate change, political and economic instability, increased educational competition, and technological changes like phones and social media.

Further, for teenage girls in particular, a toxic ‘triple bind’ of impossible expectations (be supportive and nurturing, be super competitive, and do both of the above effortlessly while looking ‘hot’) plays a key role.

However, as depression and anxiety spread among young people, it does seem as though these conditions are becoming normalised, and that youth are becoming more open and compassionate with one another.

Moreover, high school clubs as well as college programs that focus on reducing stigma with respect to mental disorders have been shown to create real benefits.

All evidence to-date suggests that many kinds of mental illness carry less stigma for younger generations. As these young people attain full maturity, the tide could eventually turn even for disorders like schizophrenia—the way it has, convincingly, for issues like same-sex marriage over the past 20 years. However there are steps we can take to keep pushing this process forward.

What Can Create More Positive Change?

Whilst we’ve learned that information all by itself doesn’t reduce stigma, that doesn’t mean we should stop educating people from early ages about diagnosis and treatment. There is evidence to suggest public health campaigns can reduce stigma if properly funded and executed. For example, surveys conducted two years after Scotland’s multi-year, multi-platform ‘See Me’ campaign which aimed to normalise mental illness, showed a 17% drop in fear of people with serious mental illness, among other good outcomes.

A much briefer social media campaign in Canada called ‘In One Voice’ resulted in a ‘small but significant’ decrease in a desire for social distance one year after it ended.

Policies and education do work to reduce stigma, but they alone cannot change human hearts.

It has probably helped a lot for more and more people to talk about their experiences with mental illness, on social media and through popular media like magazines and television.

In 2013, the New York City chapter of the National Alliance on Mental Illness teamed up with marketing company JWT New York to launch the ‘I Will Listen’ campaign where they asked people to publicly pledge on social media to hear and support individuals struggling with mental illness.

That early effort encouraged others to later speak out about their experience with depression and addiction on platforms like TikTok and Facebook, making private struggles public in a way that previous generations only glimpsed with books like William Styron’s groundbreaking 1990 memoir Darkness Visible. Or more recently, books like Kay Redfield Jamison’s memoir An Unquiet Mind (1996), Andrew Solomon’s The Noonday Demon (2001), and Brian Broome’s Punch Me Up to the Gods (2021).

It’s important to note that there is little solid evidence to-date that talking about mental illness on social media reduces stigma, and in fact, at least one study found that social media (if it promotes stereotypes) can actually increase stigma.

But that doesn’t mean people shouldn’t try. It could simply mean that it isn’t enough for people to talk about their own experiences with mental illness; we might also need concerted efforts to limit hate speech and misinformation on social media about people with mental illness. And that personal disclosures of mental disorder need to be grounded in rehearsal, support, and timing, as is the case with stigma expert Pat Corrigan’s program, Honest, Open, and Proud.

Beyond social media, news and entertainment media have a long way to go in representations of mental illness.


Many studies through the years have shown that stigmatising portrayals result in more social stigma and can make suffering much worse in people suffering from mental illnesses. Although more accurate and humanised accounts do appear, the predominant themes are ones of incompetence and violence.

We simply need better, more accurate, and more humanised media portrayals, and perhaps that needs to start with targeting journalists and other content creators with specialised education in college, graduate school, and professional development courses.

As well, better access to evidence-based treatments is a huge priority for the entire mental health profession. We now understand that many forms of psychotherapy and family-based treatment, as well as medications when needed, can combat some of the most serious symptoms and impairments related to mental disorders. But distressingly low proportions of those in need of such care actually receive evidence-based treatments. For many, even just regular therapy is financially out of reach.

Finally, as noted above, young people appear, in many surveys, to be the drivers of changed attitudes and behaviour.

A devastating kind of stigma is self-stigma, and evidence indicates that millennials and Gen Z are turning away from seeing themselves as broken for feeling depressed and anxious, toward seeing themselves as having common illnesses that can be managed and even overcome with treatment, group support, and solidarity.

Young people are the key. Not just because they are always the ones who will shape the future, but because today’s youth are facing formidable mental health challenges. If we can support their mental health through these waves of stressful social change, they might have the compassion and the wisdom to alleviate the suffering of those with mental illness, instead of making it worse with stigma.