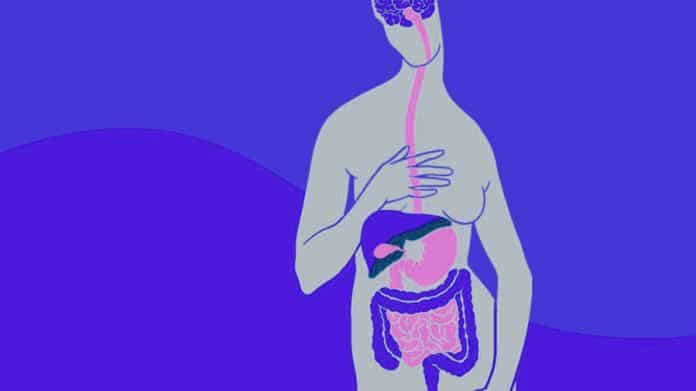 As your ‘second brain,’ the state of your gut has been shown to play an important role in your neurological health. Importantly, studies have shown probiotics (beneficial bacteria) can help decrease pathological hallmarks of Alzheimer’s disease (AD), including amyloid plaques and tangles.

One of the most impressive of these studies was published in Frontiers in Aging Neuroscience in 2016. Sixty elderly patients diagnosed with Alzheimer’s received either a placebo or a probiotic milk product containing Lactobacillus acidophilus, Lactobacillus casei, Bifidobacteriumbifidum and Lactobacillus fermentum for 12 weeks.

At the beginning and end of the study, participants underwent a standardised cognitive assessment and a highly sensitive c-reactive protein test, which is a powerful marker of inflammation. As reported by neurologist Dr. David Perlmutter:

“The results of the study were stunning. The placebo group showed an increase in hs-CRP, the inflammation marker, by an impressive 45 percent. In the group taking the probiotic, on the other hand, hs-CRP … declined by 18 percent, indicating a dramatic reduction in inflammation.

But here’s the truly exciting news. Over the 12 weeks, the patients in the placebo continued to decline mentally, as you might expect … But the group on the inflammation reducing probiotics actually demonstrated … improvement, with their MMSE [mini mental state examination] scores going from 8.67 up to 10.57, and that’s a huge improvement.

Again, not only was their mental decline stopped in its tracks, these individuals regained brain function! The message here is that inflammation is directly determined by the health and diversity of our gut bacteria, and this has major implications in terms of brain health, function, and disease resistance.”

Your Gut and Brain Are Linked

Since then, several other studies have been published, showing probiotics can help improve cognitive function and ward off dementia, including Alzheimer’s. While this may seem all too simple to be true, it makes perfect sense when you consider the deep connections that exist between your gut and your brain. As explained by Harvard Health:

The primary information connection between the brain and gut is the vagus nerve, the longest nerve in the body. The gut has been called a ‘second brain’ because it produces many of the same neurotransmitters as the brain does … What affects the gut often affects the brain and vice versa.

When your brain senses trouble, the fight-or-flight response is activated which sends warning signals to the gut, which is why stressful events can cause digestive problems like a nervous or upset stomach. On the flip side, flares of gastrointestinal issues like irritable bowel syndrome (IBS), Crohn’s disease, or chronic constipation may trigger anxiety or depression.”

According to a 2017 study in Scientific Reports, the Bifidobacterium breve strain A1 may be of particular use in Alzheimer’s treatment. Using Alzheimer’s disease model mice, the researchers were able to confirm that daily oral administration of B. breve A1 reduced the cognitive dysfunction normally induced by amyloid beta. According to the authors:

“We also demonstrated that non-viable components of the bacterium or its metabolite acetate partially ameliorated the cognitive decline observed in AD mice.

Gene profiling analysis revealed that the consumption of B. breve A1 suppressed the hippocampal expressions of inflammation and immune-reactive genes that are induced by amyloid-β. Together, these findings suggest that B. breve A1 has therapeutic potential for preventing cognitive impairment in AD.”

One of the mechanisms behind these protective effects was found to be the suppression of amyloid-beta-induced changes in gene expression in the hippocampus. In short, the bacterium had an ameliorating effect on amyloid-beta toxicity. Interestingly, B. breve A1 did not actually alter the composition of the animals’ gut microbiota to any significant degree; rather, many of the benefits appear to be related to significantly raised blood levels of acetate, a by-product of fermentation by gut bacteria. As explained by the authors:

“One of the main functions of gut microbiota is the fermentation of dietary fibres in the gut and produce short-chain fatty acids (SCFAs), mainly acetate, propionate, and butyrate, which are the major end products of carbohydrate metabolism in Bifidobacteria.”

When looking at SCFA levels in the animals’ blood, the mice treated with B. breve A1 had significantly higher levels of acetate, but not propionate or butyrate, compared to controls.

Other microbiota-derived SCFAs may also play a role, however. A 2019 study found that rats given both probiotics and prebiotics performed significantly better on spatial memory tests, and this improvement was attributed to increased levels of brain-derived neurotrophic factor (BDNF).

Butyrate — a SCFA produced when gut bacteria ferment fibre — activates the secretion of BDNF. According to the authors, the improvement also correlated with “decreased levels of pro-inflammatory cytokines and better electrophysiological outcomes in the hippocampi.”

This led them to conclude that “the results indicated that the progression of cognitive impairment is indeed affected by changes in microbiota induced by probiotics and prebiotics.”

Probiotics Have Preventive and Therapeutic Potential for AD

The 2018 paper, “Probiotics for Preventing Cognitive Impairment in Alzheimer’s Disease,” points out that probiotics can inhibit the progression of neurodegeneration by:

Inflammation and oxidative stress modulation are primarily accomplished through the gut microbiota’s effects on your gut-brain axis, which in addition to your central nervous system (CNS) and enteric nervous system (ENS) also includes your autonomic nervous system, neuroendocrine system and immune system.

These in turn are connected to various pathways involved in the regulation of immune function and metabolic homeostasis. These pathways include your vagus nerve and hypothalamic-pituitary adrenal pathway. According to “Probiotics for Preventing Cognitive Impairment in Alzheimer’s Disease:”

“Accumulating evidence suggests that gut microbiota alterations can influence the progression of neurological disease and may be a major factor in the development of AD.

For instance, a recent preclinical study revealed a remarkable shift in the gut microbiota of APP transgenic mice as compared to healthy, wild-type mice … It was strongly advocated that a distinct microbial constitution in AD mice may contribute to amyloid deposition …

In addition, a clinical study characterising the gut microbiota composition of AD subjects reveals decreased microbial diversity and changes in bacterial abundance compared with controls; these changes include decreased levels of Firmicutes and Bifidobacterium and increased levels of Bacteroidetes.”

The researchers speculate that gut microbiome alterations allowing for the colonisation of pathogens that increase gut permeability can perturb the gut-brain axis, thereby raising your risk of Alzheimer’s. They cite research in which Enterobacteria infection was found to exacerbate the progression of Alzheimer’s as an example of this theory.

Many studies have suggested immune activation and low grade systemic and intestinal inflammation are important factors in Alzheimer’s, which can help explain why probiotics appear so beneficial. As noted in a 2018 publication:

From a subgroup of 23 patients … out of 55 consecutive outpatients with symptoms of cognitive decline, intestinal bacterial taxa and immune system as well as inflammation biomarkers in serum and stool specimens were investigated.

Confirming our earlier findings … signs of immune activation could be detected … Most interestingly, a close correlation was found between foecal S100A12 and serum neopterin … indicating coincident low grade systemic and intestinal inflammation …

There was no influence of gender. These findings again underline the role of gut inflammation as a possible pathogenic cofactor in cognitive deterioration and dementia. In an earlier study … the potential role of pro-inflammatory … proteins in the pathogenesis of AD was described.

Circulating CRP, known to affect cognition negatively, was elevated in our series without clinical signs of acute infection … further indicating low grade inflammation … in this group of patients. We found pro-inflammatory Clostridium Cluster I significantly correlated with anti-inflammatory Faecalibacteriumprausnitzii.

In a recent paper … the stool abundance of selected bacterial stool taxa including F. prausnitzii and the blood levels of pro and anti-inflammatory cytokines in cognitively impaired patients and in a group of controls was measured.

Amyloid positive patients showed higher levels of pro-inflammatory cytokines compared with both controls and with amyloid negative patients. A possible causal relation between gut microbiota related inflammation and amyloidosis was suspected in this study …

All these findings together may indicate changes in the microbiota-gut-brain-axis correlated to neuroinflammation during cognitive decline. Because neuroinflammation is an early event in the pathogenesis of dementia, these markers may be important in the very beginning of this devastating process.”

The authors speculate that the increase in immune activation and inflammation seen in Alzheimer’s patients may be due to changes in microbiota that tends to occur with age.

They also note that “the role of probiotics in preventing dementia seems promising” and that further studies should be done to further tease out the exact mechanisms by which probiotics protect against neurodegeneration.

Alzheimer’s Prevention and Treatment Beyond Probiotics

While optimising your gut microbiome is an important part of Alzheimer’s prevention and treatment, it needs to be part of a more comprehensive plan. Dr. Dale Bredesen, director of neurodegenerative disease research at the UCLA School of Medicine, discusses treatment alternatives in his book, “The End of Alzheimer’s: The First Program to Prevent and Reverse Cognitive Decline.”

Bredesen has identified dozens of variables that can have a significant influence on Alzheimer’s, and developed a treatment program based on those findings, called ReCODE.

In 2014, Bredesen published a paper detailing how leveraging 36 healthy lifestyle parameters reversed Alzheimer’s in 9 out of 10 patients.

This included the use of exercise, a ketogenic diet, optimising vitamin D and other hormones, increasing sleep, meditation, detoxification and eliminating gluten and processed food.

As the prevalence of Alzheimer’s disease continues to climb, it’s important to realise that this disease is primarily driven by preventable lifestyle factors, and that conventional drug treatments are ineffective — or worse.

As noted in a December 2018 article by Perlmutter, the largest class of medications prescribed for Alzheimer’s, called cholinesterase inhibitors, which break down acetylcholine, have actually been shown to accelerate cognitive decline! This, clearly, is the last thing you want, which means making lifestyle changes are all the more important, and the earlier you make them, the better.

As for how to nourish your gut microbiome, your best bet is to make your own fermented vegetables, which will provide plenty of beneficial bacteria for a fraction of the cost of a supplement.