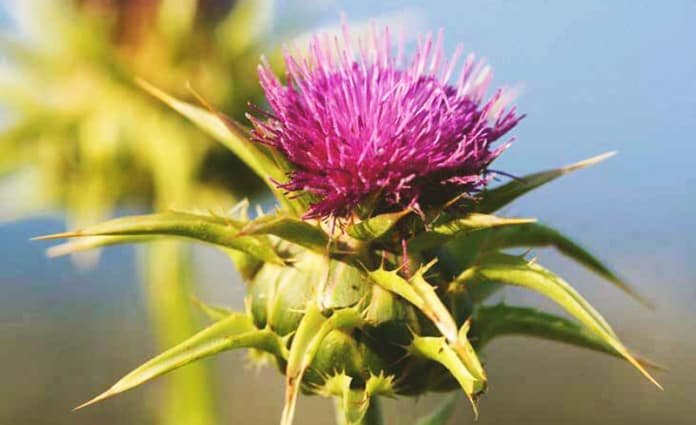 Throughout history, people have used the fruit and seeds of the milk thistle plant as a treatment for liver disorders. During the Middle Ages it was used as an antidote for liver toxins and by 1898 physicians were using it to treat liver, kidney and spleen disorders. Currently, the German Commission E lists milk thistle for the treatment of hepatic cirrhosis and toxin-induced liver damage and to support chronic inflammatory liver conditions.

Milk thistle (Silybum marianum) is a member of the Asteraceae family and an herbaceous perennial native to Southern Europe and Asia. The plant enjoys full sun and grows to a height of nearly 5 feet. It blooms between July and August with deep purple to pink flowers. The plant goes by several other names, including Holy thistle, Mary thistle, Our Lady’s thistle, wild artichoke and St. Mary thistle. Traditionally, the leaves have been harvested to use in salads and the flower may be roasted and used as a coffee substitute. However, it is the seeds of the milk thistle that were prized for their medicinal activity. According to the NIH, the oldest recorded use of the plant was by Dioscorides, who believed it could be used as a treatment for snake bites.

Silymarin can be isolated from milk thistle seeds, and while the term milk thistle and silymarin have been used interchangeably, it is technically inaccurate.

Multiple studies have demonstrated the ability of silymarin to help protect your liver, and it is regularly used in individuals whose liver has been damaged by nonalcoholic fatty liver disease, hepatitis and liver cancer.

In one review, researchers found nearly 1,500 documented cases where the mortality was less than 10% in patients treated with Legalon® SIL, a pharmaceutical silibinin compound.

In another case report,10 doctors successfully treated two patients who accidentally ingested the death cap mushroom with a combination of n-acetylcysteine, cimetidine, silibinin and high-dose penicillin.

Benefits to liver health from silymarin likely result from the antioxidant, anti-inflammatory and antifibrotic properties of the compound.

Silymarin also has demonstrated the ability to reduce virus-related liver damage and has a direct antiviral effect when administered intravenously in patients with hepatitis C.

Silymarin has a positive effect on nonalcoholic steatohepatitis (NASH), which is a more advanced form of nonalcoholic fatty liver disease.The compound can also help reduce the fibrotic changes that lead to liver cirrhosis. In combination with vitamin E, researchers found silymarin helps improve liver function tests and can be:

“… an alternative valid therapeutic option particularly when other drugs are not indicated or have failed or as a complementary treatment associated with other therapeutic programs.”

Your Liver: The Great Detoxifier

One of the largest organs in your body is your liver, and for good reason. It performs many metabolic and detoxifying functions, helping to convert toxic substances into harmless substances that are then released from your body.

Your liver is in your upper abdominal cavity just under your right diaphragm, where it sits on top of your stomach. A normal healthy adult liver weighs about 3 pounds and is made of two lobes connected by a band of connective tissue.

Just inside the hollow under the liver is the gallbladder, where your body stores bile. At any given time, your liver holds about 13% of your body’s blood supply, which it filters and then excretes toxins in 800 millilitres to 1,000 millilitres of bile each day. This is emptied into your gallbladder.

In addition to detoxifying your blood, your liver produces some of the proteins for blood plasma, converts excess sugar into glycogen, and helps balance the production of glucose. Your liver is also responsible for regulating blood clotting mechanisms, resisting infections and clearing bilirubin that is formed when haemoglobin breaks down.

Silymarin offers significant benefits to your liver, including the ability to increase glutathione, which is a powerful antioxidant crucial for liver detoxification. Researchers have also found it may help your liver cells to regenerate, supporting the only organ in your body capable of regeneration.

Incidence of Liver Disease on the Rise

Liver damage effects all of the above functions and more.

Although many tend to equate liver disease with alcohol use, as many as 100 million people suffer from nonalcoholic fatty liver disease (NAFLD), which is associated with obesity.

Risk factors for nonalcoholic fatty liver disease include obesity, diabetes, high triglyceride levels and poor eating habits. The condition is sometimes called a silent disease because you may not experience any symptoms and many people may live with the condition without developing further liver damage.

If NAFLD progresses with signs of inflammation and cell damage, it is called nonalcoholic steatohepatitis (NASH).

NAFLD is also the most common type of liver disease found in children. Data released in January 2020 from a large cohort in the U.K. found 20% of young adults had NAFLD.

When the researchers widened the data set, they found over 20% had evidence of NAFLD and 2.5% had developed fibrosis. Breaking out the data further, they found at 17 years, 2.5% had moderate to severe levels, yet by age 24 this had risen to 13%.

Many of the health benefits attributed to silymarin are the result of the compound’s capacity to help reduce cellular inflammation. Research has suggested silymarin does this using a two-phase process similar to that used by other natural compounds such as curcumin and epigallocatechin gallate, found in green tea.

An important factor in those steps is the activation of AMP-activated protein kinase (AMPK). This is an enzyme that sometimes is called the “metabolic master switch” since it plays an important role in regulating metabolism. According to the Natural Medicine Journal, AMPK regulates biological activities to normalise energy imbalances. In addition:

“AMPK helps coordinate the response to these stressors, shifting energy toward cellular repair, maintenance, or a return to homeostasis and improved likelihood of survival. The hormones leptin and adiponectin activate AMPK. In other words, activating AMPK can produce the same benefits as exercise, dieting, and weight loss — the lifestyle modifications considered beneficial for a range of maladies.”

The plant also has neuroprotective effects and has been used in the treatment of Alzheimer’s and Parkinson’s disease in modern society and neurological diseases such as cerebral ischemia for well over 2,000 years.

The antioxidant and anti-inflammatory properties may contribute to the neuroprotective effects that help prevent a decline in brain function as you age.

In one study, researchers used silymarin to reduce oxidative stress and inflammation in an animal model that helped reduce the potential for dementia in obese animal subjects.

Other studies have also demonstrated the ability of milk thistle to reduce amyloid plaques in animal models associated with Alzheimer’s disease.

Silymarin has demonstrated antiosteoclastic activity in animal studies, causing one research team to conclude it significantly prevents bone loss, potentially “either due to direct interaction with Erbeta [an estrogen receptor beta-isoform] or increasing bone formation parameters including calcium, phosphorus, osteocalcin and PTH.”

The American Pregnancy Association writes that blessed thistle has been used for hundreds of years to raise a woman’s milk supply, and it is especially effective when taken with fenugreek.

One published study of 50 healthy lactating women demonstrated oral supplementation with 420 milligrams per day of silymarin boosted their milk supply by 85.94% as compared to the women taking a placebo whose milk supply went up 32.09%.39 None of the women dropped out and no one reported unwanted side effects.

Before planting milk thistle in your garden or picking up a milk thistle supplement, there are a few things to consider:

Research has found silibinin is poorly absorbed as it has low water solubility. Using a novel formulation, combining silibinin with phosphatidylcholine, researchers were able to improve the solubility and bioavailability, which markedly improved the therapeutic efficiency.

If you’re hoping to grow your own plants in your backyard and harvest for tea and salads, be forewarned the plant is highly invasive and spreads quickly. While you may not mind having it all over your yard, it doesn’t respect your neighbour’s boundaries and will likely end up in their yard as well.

Milk thistle is also highly toxic to livestock, so if you have grazing animals it’s important you don’t plant it outside. Milk thistle has adapted to growing even in poor quality soil. The plants enjoy full sun and once the flowers have begun to dry, they’ll be ready for harvest.

Cut the flowers and place them in a paper bag, storing the bag in a dry place so the flower heads dry. Once all the moisture is gone, shake the bag to separate the seeds, which can then be kept in a dry airtight container.

The seeds can be powdered in a coffee grinder and sprinkled on your salads, added to smoothies or even raw juice. You can also use the seeds to make your own tea.

For further information and references, please visit the below website.
www.wakeup-world.com