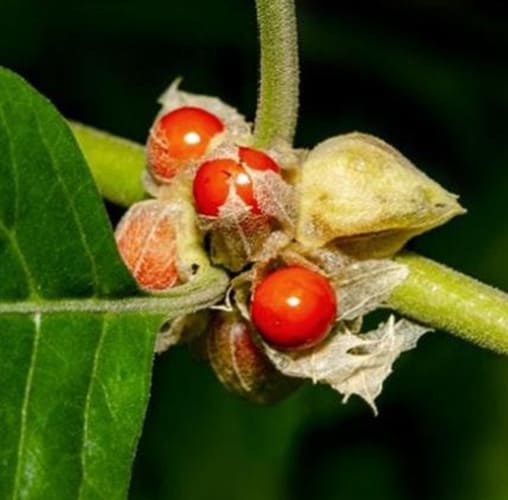 Ashwagandha (Withania somnifera) is a herb that’s been used in Ayurvedic medicine for thousands of years. Known as Rasayana in Ayurveda, ashwagandha is an adaptogenic herb that enhances your body’s ability to withstand stress and is considered to be a rejuvenator.

According to Ayurveda, ashwagandha is also known as:

Also known as Indian ginseng or winter cherry, ashwagandha contains compounds known as withanolides, which have not only antioxidant and anti-stress activities but also enhance immunity, protect the heart, and offer neuroprotective, hypoglycaemic and anti-tumour effects.

Its name comes from the Sanskrit word “ashwa,” or horse, because its root smells like horse urine and gives you the power of a horse when consumed.

In addition to withanolides, ashwagandha contains phenolic acids, alkaloids, saponins and tanins, which offer a wide variety of pharmacological activities. Together, ashwagandha and its bioactive compounds may benefit diseases such as arthritis, impotence, amnesia, anxiety and more. Ayurvedic doctor Dixa Bhavsar explained on social media:

“This miracle herb has taken the medical world by storm (especially during #covid). And for good reason. Ashwagandha (Indian ginseng) is immune boosting, anti-inflammatory, sleep inducing, anticonvulsant, anti-stress, and antibacterial properties, this herb is like the one-stop shop for all ailments.”

Another study involving 64 individuals who had a history of chronic stress evaluated the effectiveness of a full-spectrum extract of ashwagandha root to help reduce stress and anxiety. Those in the study group took 300 milligrams (mg) of ashwagandha root twice a day for 60 days.

Analysis of the data revealed a significant reduction in stress assessment at the end of 60 days when compared to the placebo group. People taking ashwagandha also had substantially lower serum cortisol levels. According to the study, which was published in the Indian Journal of Psychological Medicine:

“The findings of this study suggest that a high-concentration full-spectrum Ashwagandha root extract safely and effectively improves an individual’s resistance towards stress and thereby improves self-assessed quality of life.”

Ashwagandha has notable benefits for brain health, such that taking ashwagandha for 90 days improved memory and focus in cognitively sound adults between the ages of 20 and 55.

The herb was also found to improve aspects of cognition, including verbal working memory, response time and social cognition response in people with bipolar disorder.

If you’re looking for a sound night’s rest, sleep hygiene should be your go-to response, after tending to things like eliminating light in your bedroom, turning off electronics well before bedtime and going to bed and waking at approximately the same time each day.

In an analysis of five randomised controlled trials containing 400 participants, ashwagandha extract had a beneficial effect in improving sleep. The benefits were most pronounced in those with insomnia, those who took a dosage of 600 mg per day or more, and those using ashwagandha for at least eight weeks.

As a pleasant “side effect,” those who took ashwagandha had improved mental alertness when they woke up, along with less anxiety.

A 2020 study also tested ashwagandha for its ability to promote sleep. Based on the results, the researchers believe the herb could be an alternative treatment for insomnia. It found that ashwagandha root extract improved sleep quality and helped in managing insomnia.

Withanolides in ashwagandha have immunomodulating properties that can either stimulate or suppress your immune system to help fight infections, cancer and other diseases. As explained in the Journal of Clinical Medicine:

“Ashwagandha (Withania somnifera or WS) which is mentioned in the Rasayana group of medications in the Ayurveda tradition of India has been extensively investigated as an immunomodulatory agent. The components in WS mainly withanolide glycosides exert their immunomodulatory action by mobilising and activating macrophages and induce proliferation in murine splenocytes. This effect has been suggested to be the idea of its use as a Rasayana in Ayurveda.”

In a randomised placebo-controlled double-blinded study, subjects received either 60 mg of ashwagandha extract or a placebo. The extract significantly improved immune profiles by modulating both the innate and adaptive immune systems. According to the researchers, the effects were so impressive that “[b]oosting the immune system of people at risk of infection and during widespread infections can be targeted with WS extract.”

Withaferin A (WFA), found in ashwagandha, has also been found by at least two independent research groups to bind to the viral spike protein in SARS-CoV-2. By interfering with the spike protein, as well as not affecting ACE2 expression in the lungs, researchers concluded it “demonstrates real potential as a therapeutic agent to treat or prevent the spread of COVID-19.”

Ashwagandha and its withanolides are powerful anti-inflammatories. The herb suppresses inflammatory responses in microglial cells, which are found in the central nervous system, by “simultaneously down-regulating the NF-kB and upregulating the Nrf2 pathways.”

Ashwagandha has been found to interfere with the growth of new cancer cells while leaving normal cells untouched, along with helping to induce programmed death of cells and sensitise cancer cells to apoptosis.

Multiple studies have found anticancer effects from both ashwagandha and its active component WFA, for a variety of cancers including prostate, leukaemia, breast, pancreatic, glioblastoma multiforme and colorectal. At least two uses for the herb and its compounds were suggested by a review published in the International Journal of Molecular Sciences:

“First, given the safety record of WS [Withania somnifera], it can be used as an adjunct therapy that can aid in reducing the adverse effects associated with radio and chemotherapy due to its anti-inflammatory properties. Second, WS can also be combined with other conventional therapies such as chemotherapies to synergise and potentiate the effects due to radiotherapy and chemotherapy due to its ability to aid in radio and chemosensitisation respectively. Taken together, all evidence to-date indicates the potential of WS or WFA in cancer management.”

Because of ashwagandha’s anti-inflammatory properties, it’s often used in managing arthritis. When researchers analysed 77 registered clinical trials in India to look for evidence of ashwagandha’s anti-arthritic properties,  they found “a dosage of 6 gm in powder form or extracts in tablets, or 500- to 1000-mg capsule consumed for a duration of 8 to 12 weeks may be useful in managing symptoms of arthritis in patients.”

Traditionally, ashwagandha is noted in Ayurvedic manuscripts as being an effective remedy for rheumatoid arthritis (Amavata) and osteoarthritis (Sandhi-gata Vata). Another review article noted:

In men struggling with infertility, ashwagandha has been shown to balance their luteinising hormone, which controls reproductive organ function in both men and women. Ashwagandha can also help boost testosterone levels in men, which can have a beneficial effect on libido and sexual performance.

It’s also been shown to improve the quality of semen in infertile men, in part by inhibiting reactive oxygen species. In otherwise healthy women, ashwagandha has been shown to improve arousal, lubrication, orgasm and overall sexual satisfaction. Ashwagandha root extract may also help to relieve mild to moderate symptoms of menopause in perimenopausal women.

When using powerful nutraceuticals like ashwagandha, working with an Ayurvedic or integrative health care practitioner can help ensure you receive optimal benefits. Depending on your health status and other factors, for instance, it can have differing effects. Bhavsar explained:

“The leaves of ashwagandha helps in losing weight. Yes, you heard me right. Mostly I see people getting confused when they hear its useful for weight gain & weight loss at the same time. So this is just to clear the confusion. Its dosage depends on the patient’s condition, prognosis and the mind-body type.”

While ashwagandha is generally safe, well-tolerated and non-toxic, it shouldn’t be used by pregnant women, breastfeeding women or people taking sedatives. Making sure you’re getting a high-quality product is also of utmost importance. To ensure effectiveness, I recommend using 100% organic ashwagandha, free of fillers, additives and excipients.

*For more information and references, please visit the below website.
www.wakeup-world.com